Sporadic mesenteric desmoid-type fibromatosis with “double-hit” T41A and S45P beta-catenin mutation profile: a case report of an extremely rare event—clinically relevant or much ado about nothing?

Desmoid-type fibromatosis (DTF) is a rare non metastasizing clonal fibroblastic proliferation, arising from fascial or deep musculoaponeurotic structures (1,2). It is characterized by local invasiveness and unrelenting recurrences with recurrence rates ranging from 19% to 38% (1-4) and overall unpredictable biology. It primarily affects young adults, especially females with a predilection for the extremities, trunk, and intestinal mesenteries (2). While most desmoid tumors (approximately 85%) are sporadic, some occur as part of familial syndromes such as familial adenomatous polyposis (FAP), caused by germ-line mutations in adenomatous polyposis coli (APC) gene (5). Sporadic desmoid tumors are characterized by mutations in the gene-encoding β-catenin, CTNNB1. β-catenin is a cadherin-binding protein involved in cell-cell adhesion and a transcriptional activator of genes such as c-MYC that promote cellular proliferation and survival. The APC complex marks β-catenin for proteasomal degradation by sequentially phosphorylating four critical amino acids (serine 45, 37, and 33 and threonine 41), all encoded by exon 3 of the β-catenin gene where the majority of CTNNB1 mutations occur (6). Three major hotspot mutations within the CTNNB1 gene have been identified in sporadic cases of desmoid tumors: two occurring at serine 45 (S45F and S45P) and one at threonine 41 (T41A) (6). For the most part, these mutations appear to be mutually exclusive, though double-hit mutations have only been rarely reported.

Recent studies appear to suggest that CTNNB1-mutated desmoid tumors have a significantly worse recurrence-free survival than wild-type tumors and S45F mutated tumors have been shown to be more aggressive in some series (7-9). The therapeutic consequence of these specific mutations is not entirely clear. Given that desmoid tumors vary considerably in their clinical course and subsequent treatment strategies, there is an increasing trend towards genotyping these tumors with a view to identifying potential prognostic and therapeutic markers. Herein, we report an exceptionally rare case of mesenteric desmoid type fibromatosis harboring dual T41A and S45P mutations in exon 3 of the CTNNB1 gene. We present the following case in accordance with the CARE reporting checklist (available at https://pcm.amegroups.com/article/view/10.21037/pcm-22-2/rc).

A 74-year-old female with a history of gastric bypass and cholecystectomy presented with sharp, stabbing abdominal pain of sudden onset. A computed tomography (CT) scan (Figure 1A,1B) showed a large pelvic mass concerning for an adnexal neoplasm closely abutting the left common iliac artery. Intraoperatively, the mass appeared to be arising from the mesentery of the small bowel near the prior Roux-en-Y bypass (performed 8 years ago for morbid obesity). She underwent an exploratory laparotomy, adhesiolysis, bilateral salpingo-oophorectomy, small bowel resection, Roux-en-Y revision, and splenectomy. 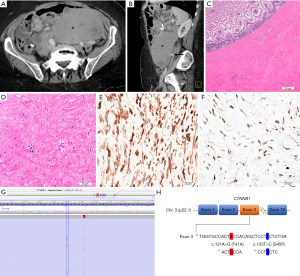 Gross examination revealed a 21.0 cm × 11.0 cm × 7.5 cm mass located on the mesenteric aspect of the small bowel. Sectioning of the tumor revealed a pale, tan-gray, diffusely fibrotic, homogenous cut surface devoid of any hemorrhage or necrosis. The mass grossly involved the muscularis of the small bowel. However, the mucosa remained uninvolved. Histopathologic examination demonstrated a banal pauci-cellular spindled cell neoplasm with variable collagenization and focal myxoid changes infiltrating the mesentery and small intestinal muscularis propria. The nuclei of the cells contained tiny nucleoli with no atypia. There was no tumor necrosis or appreciable increased mitotic activity. By immunohistochemistry, the lesional cells were variably positive for smooth muscle actin, focally positive for desmin and beta-catenin and negative for mdm2, DOG1, CD117, S100, MUC4 and CD34. The quantitative ki-67 proliferative index was estimated at <1% (Figure 1C-1F). Taken together, the overall features were most consistent with mesenteric DTF. To further confirm the diagnosis, CTNNB1 mutation analysis, performed by next generation sequencing identified the following mutations (Figure 1G,1H): DNA change c.121A>G resulting in an amino acid change p.T41A (Thr41Ala) as well as DNA change c.133T>C resulting in an amino acid change p.S45P (Ser45Pro). Both mutations occurred within the CTNNB1 gene confirming the extremely rare “double-hit” mutation profile. The patient did not receive any further systemic therapy after the initial surgical resection and is currently 18-months post-surgery with no evidence of recurrent disease. All procedures performed in this study were in accordance with the ethical standards of the institutional and/or national research committee(s) and with the Helsinki Declaration (as revised in 2013). Written informed consent was obtained from the patient for publication of this case report and accompanying images. A copy of the written consent is available for review by the editorial office of this journal.

Recent studies have shown CTNNB1-mutated desmoid tumors to have a significantly worse recurrence-free survival than wild-type tumors (7,8). Furthermore, among the CTNNB1 mutated tumors, those harboring the S45F mutation appear to behave more aggressively (6,10). Emerging data from recent large clinical studies and molecular profiling seems to indicate significant heterogeneity in tumor biology among the different types of DTF. Specifically, desmoid tumors with CTNNB1 T41A gene mutation are known to be associated with a better 5-year recurrence-free survival compared to those with S45F mutation, and desmoid tumors within the abdomen behave less aggressively than those in extra-abdominal sites (7,11,12). Indeed, the largest prospective outcome data on DTF from the French Sarcoma Group, suggests that anatomic location is the single most important determinant of event-free survival (13).

The optimal treatment of DTF remains a challenge with unacceptably high recurrence rates after various multi-modality approaches including active surveillance (watchful waiting), surgery, chemoradiation, anti-estrogenic, non-steroidal anti-inflammatory agents, tyrosine kinase inhibitors, and different molecular targeted therapies. The current treatment recommendation is to personalize therapy based on the consideration of several factors including tumor site, size, age, CTNNB1 mutation status, and coexisting morbidities. Precedent literature on the comprehensive molecular analysis of DTF by Mullen et al. uncovered a subset of sporadic DTF which harbor double mutations in exon 3 of CTNNB1 involving T41A and S45P accounting for approximately 1.9% of total cases within the series. The clinical characteristics of the rare double hit mutation profile was not further elaborated on in their series (11). Our index patient was treated with surgical resection alone with no systemic therapy and so far, has remained free of recurrence, 18 months after primary surgical treatment. So far, only double mutation profiles involving the T41A and S45P (considered favorable types) have been reported. Based on our anecdotal observation from the index case, one might be tempted to speculate that the desmoid tumors harboring double T41A and S45P beta-catenin mutations may not significantly alter treatment options or impact clinical outcome. Nonetheless, the clinical implications and therapeutic significance of this occurrence remains to be determined.

The role of tumor immune microenvironment in desmoid tumors has been previously described (14). Notably, T41A- and S45F-mutated desmoid tumors are known to have a differential expression of inflammation-related genes, compared to wild type DTF. Specifically, T41A-mutated cases, generally associated with better prognosis, have overexpression of anti-inflammatory/antitumor markers, such as CREB1, MAPK3, HMGN1, MKNK1 and IRF1, as well as lower levels of proinflammatory markers like TGF-β3 and TGF-β2. This peculiar inflammatory setting augments the role of beta-catenin signaling activation, thereby causing T-cell exclusion and immune evasion (evidenced by low tumor infiltrating lymphocytes and tumor associated macrophages and a low or absent expression of PD-1 and PD-L1) (14-17). Even though there is no published data on the pathways involved in “double-hit” CTNNB1 mutations in sporadic desmoids, similar inflammatory pathways might play a role. Furthermore, epigenetic alterations, such as aberrant DNA methylation, may also play a role (12,18). Given that oncogenes regulate the inflammatory milieu in tumors, it is speculated that by activating specific pro- and anti-inflammatory mediators, the “double-hit” CTNNB1 mutations might produce a unique inflammatory milieu. Whether this presumed “inflammation signature” results in a subsequent impact on clinical behavior remains to be seen.

The clinical course for DTF is unpredictable, ranging from spontaneous regression to locally aggressive behavior. However, to date, there are no molecular determinants that reliably and consistently identify tumors with a high risk for recurrence. While mutations in the gene-encoding β-catenin are frequent in sporadic desmoid tumors, it remains uncertain if the mutation status solely predicts clinical outcome (7,11,12). Furthermore, the question remains if patients with specific mutation profiles should be treated differently. Given the extremely rare occurrence of “double-hit” CTNNB1 mutations in sporadic DTF, there is currently no evidence, for now, that this entity behaves differently from tumors bearing either mutation types or if an aggressive (or different) therapeutic approach is warranted.

In summary, we presented a case of mesenteric sporadic desmoid fibromatosis in a 70-year-old female with “double-hit” CTNNB1 mutation at exon 3 involving both T41A and S45P, treated with surgical resection only. The limited data from precedent literature and the index case on this extremely rare subset of desmoid fibromatosis is insufficient to predict clinical outcomes. However, the information gleaned from the index cases suggests that a “double-hit” T41A and S45P beta-catenin mutation does not indicate aggressive clinical behavior compared to those with either T41A or S45P profiles. Consequently, there is a growing need to routinely perform CTNNB1 genotyping on desmoid tumors using sensitive platforms like next generation sequencing. Future research involving multicenter prospective patient accrual and integrated genomic and molecular characterization of sporadic desmoid fibromatosis would enable the elucidation of the underlying biology of these tumors and development of robust prognostic models and new personalized treatment strategies.

Reporting Checklist: The authors have completed the CARE reporting checklist. Available at https://pcm.amegroups.com/article/view/10.21037/pcm-22-2/rc

Conflicts of Interest: All authors have completed the ICMJE uniform disclosure form (available at https://pcm.amegroups.com/article/view/10.21037/pcm-22-2/coif). OHI serves as an unpaid editorial board member of Precision Cancer Medicine from July 2020 to July 2022. The other authors have no conflicts of interest to declare.

Ethical Statement: The authors are accountable for all aspects of the work in ensuring that questions related to the accuracy or integrity of any part of the work are appropriately investigated and resolved. All procedures performed in this study were in accordance with the ethical standards of the institutional and/or national research committee(s) and with the Helsinki Declaration (as revised in 2013). Written informed consent was obtained from the patient for publication of this case report and accompanying images. A copy of the written consent is available for review by the editorial office of this journal.