EGFR mutations other than EGFR exon 19 deletions and exon 21 L858R substitutions are defined uncommon. They represent a wide group of various molecular changes including exon 20 insertions, exons 18 and 19 point mutations. In up to 25% of all cases of uncommon EGFR mutations, two or more different EGFR mutations are detected within a single tumor sample. These alterations are defined complex mutations (1). Several clinical data coming from retrospective data collections, reports of clinical cases and few prospective studies showed unpredictable clinical activity of EGFR-tyrosine kinase inhibitors (TKIs) in patients carrying these uncommon mutations (2,3).

On a clinical level, patients carrying uncommon EGFR mutations often differ from those with classic ones as their incidence is higher in smokers. This may in part explain the inconsistent clinical activity of TKIs in this rare setting as smoking status is a well-known negative predictive clinical driver for EGFR-TKIs activity (4,5).

Although robust data coming from large randomized clinical trial showed the efficacy and tolerability benefits of EGFR TKIs in patients carrying common EGFR mutations, few and heterogeneous prospective data are available in the uncommon mutations setting. Among the EGFR TKI phase III randomized trials published to date, only studies testing gefitinib (in the IPASS and NEJ002 studies) and afatinib (in the LUX-Lung 3 and 6) included a small number of patients with uncommon EGFR mutations (6,7). In particular, in both a post hoc analysis of the LUX-Lung trials and a recent meta-analysis, afatinib demonstrated clinical activity against the most prevalent exon 18 and exon 21 uncommon mutations (G719X and L861Q) (3,8,9).

Given the lack of robust prospective data, several retrospective analyses have been conducted and results suggested altogether the unpredictability of clinical activity of EGFR-TKIs in patients with tumours harbouring uncommon mutations than the common ones (2).

Overall, effective clinical decision of the best upfront treatment in the setting of uncommon EGFR mutation is challenging as it is supported by limited evidence coming from small subgroups of prospective trials and outcomes of clinicians’ choice are unpredictable.

Here, we report both a case report of partial disease response in a smoker patient with advanced NSCLC harbouring an exon 20 EGFR mutation treated with upfront osimertinib and a case of third generation EGFR-TKI failure upfront treatment in a never-smoker patient carrying an exon 18 mutation.

We present the following cases in accordance with the CARE reporting checklist (available at https://pcm.amegroups.com/article/view/10.21037/pcm-21-20/rc).

Treatment options were discussed with the patient. In particular, upfront chemotherapy versus second/third generation TKI were proposed. The patient asked for receiving the treatment option with the lower risk of adverse events and started first-line osimertinib 80 mg/day on the 18th of February 2019. No adverse events occurred. On the 1st of May 2019, a restaging PET-CT scan demonstrated an almost complete disease response to osimertinib (Figure 1). The patient is still receiving treatment at full dose (last follow-up was on the 24th May 2021) with no signs of radiological progression of the disease. 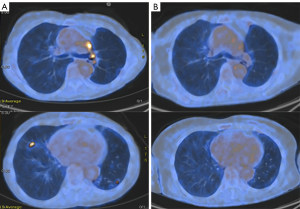 A Caucasian 65-year-old retired teacher with no history of smoking nor significant environmental exposures received diagnosis of stage IIIa (cT4 intralobar nodes, cN0) lung adenocarcinoma in September 2018. She had multiple relevant cardiovascular morbidities such as blood hypertension and atrial fibrillation but no restrictive lung disease nor family history of cancer. She underwent left lower lobectomy in February 2015 and received subsequent adjuvant chemotherapy with cisplatin and vinorelbine for 3 cycles. During the adjuvant treatment the patient experienced a common terminology criteria for adverse events (CTCAE) grade 2 diarrhea and a grade 3 febrile neutropenia. A subsequent follow-up program was conducted during which pleural progression occurred at a CT scan in October 2019. A Next Generation Sequencing FoundationOne®CDx analysis was conducted on the primary tumor. The EGFR delE709_T710insD exon 18 mutation with no other alterations in disease relevant gene was reported. DAKO PDL-1 ICH 22 C3 was negative (tumor proportion score 0%).

After discussion with the patient about treatment options with second-generation afatinib and third-generation osimertinib, upfront treatment with osimertinib 80 mg/day was started day on the 2nd of February 2020 due to mainly worries of gastrointestinal toxicity of afatinib. The treatment was quite well tolerated with only CTCAE grade 1 diarrhea after the first month of treatment. At the first disease restaging with a CT scan at the end of April 2020 (after 12 weeks of continuative treatment) further pleural disease progression was described and treatment with osimertinib was interrupted (Figure 2). A second line chemo-immunotherapy with carboplatin paclitaxel bevacizumab and atezolizumab was started with initial partial response at a restaging CT scan in June 2020 but subsequent pleural progression occurred in November 2020. A third line treatment with pemetrexed (January 2021–March 2021) did not provide clinical or radiological benefit. The patient is still alive (last follow-up on the 4th of June 2021) but she is now receiving only best supportive care.

For both cases, all procedures performed in this study were in accordance with the ethical standards of the institutional and national research committees and with the Helsinki Declaration (as revised in 2013). Written informed consents were obtained from the patients for publication of this case report and accompanying images. Copy of written consents are available for review by the editorial office of this journal.

Treatment decision process of NSCLC harbouring uncommon EGFR mutations is challenging and both second generation afatinib and third generation osimertinib may play a therapeutic role, irrespectively to smoking status. Effective clinical decision still lacks of sufficient evidence to define the best treatment strategy. In this sense, there is a clinical need of literature report of these rare molecular alterations and their predictive role for response to EGFR-TKIs in large updated databases in order to guide clinicians to personalize therapeutic strategies for NSCLC patients.

Provenance and Peer Review: This article was commissioned by the Guest Editor (Marco Russano) for the series “Uncommon Mutations in Non-Small Cell Lung Cancer” published in Precision Cancer Medicine. The article has undergone external peer review.

Reporting Checklist: The authors have completed the CARE reporting checklist. Available at https://pcm.amegroups.com/article/view/10.21037/pcm-21-20/rc

Conflicts of Interest: Both authors have completed the ICMJE uniform disclosure form (available at https://pcm.amegroups.com/article/view/10.21037/pcm-21-20/coif). The series “Uncommon Mutations in Non-Small Cell Lung Cancer” was commissioned by the editorial office without any funding or sponsorship. The authors have no other conflicts of interest to declare.

Ethical Statement: The authors are accountable for all aspects of the work in ensuring that questions related to the accuracy or integrity of any part of the work are appropriately investigated and resolved. All procedures performed in this study were in accordance with the ethical standards of the institutional and national research committees and with the Helsinki Declaration (as revised in 2013). Written informed consents were obtained from the patients for publication of this case report and accompanying images. Copy of written consents are available for review by the editorial office of this journal.