In relation to biochemical behavior V600E substitution in exon 15 highly increase BRAF activity and occur in almost 50% of cases, instead of non-V600E ones (distributed in exon 11 and 15) which show variable degrees of direct activation on MEK1/2: these kinds of mutation elicit downstream pathway through the trans-activation of Raf-1 proto-oncogene, serine/threonine kinase (CRAF) (2).

A new preclinical framework has reclassified BRAF mutations, including V600 and non-V600, into three functional classes based on kinase activity and signaling mechanism. It remains to establish whether BRAF functional class influences clinicopathologic characteristics and clinical outcomes (6).

Due to the low frequency of BRAF-mutant NSCLCs, the immunological characteristics and the efficacy of immune checkpoint inhibitors (ICIs) have not been extensively studied (7).

A real-world study supports the hypothesis that ICIs may have an efficacy in BRAF-mutant NSCLC patients similar to that observed in the overall NSCLC population (8).

This case adds to the limited current published literature on NSCLC harboring non-V600E BRAF mutations and suggests that immunotherapy is a reasonable treatment option.

We present the following case in accordance with the CARE reporting checklist (available at https://pcm.amegroups.com/article/view/10.21037/pcm-21-22/rc). 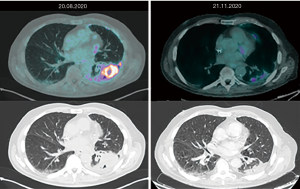 In February 2021, PET CT scan revealed a modest increase of the uptake on pleura, mediastinal lymph node and fourth-lumbar vertebra. However, in view of clinical benefit and radiological response achieved in all other sites of disease, he continued pembrolizumab treatment. The last PET CT performed 2 months later showed bone complete metabolic response and further partial metabolic response on lung, pleural and adrenal disease.

All procedures performed in this study were in accordance with the ethical standards of the institutional and/or national research committee(s) and with the Helsinki Declaration (as revised in 2013). Written informed consent was obtained from the patient for publication of this case report and accompanying images. A copy of the written consent is available for review by the editorial office of this journal. Local ethics committee approval was not required due to non-experimental content of the manuscript.

BRAF mutation is one of oncogenic driver mutations in NSCLC, which phosphorylates the downstream effectors MEK and ERK to promote cell proliferation and survival.

Not yet provided a complete BRAF mutation list; only few papers referred other mutations in exon 11 and 15 (10).

The clinical significance of class II–III mutation found in NSCLC remains unclear and may be associated with other upstream MAPK alterations, such as RAS mutation or neurofibromatosis gene (NF1) loss (11) or loss of function.

Changing of pathway by class III of alterations specifically maintain signals through dimerization with wild-type C-RAF. Upstream activation to increase ERK signaling is also requested, and obtained either through genomic alterations indeed (RAS mutations or NF1 loss) or through receptor tyrosine kinase (RTK) signaling. This upstream signaling will counter the ERK-mediated negative feedback on RAS proteins.

Class III BRAF mutations differentiate from class I and II ones for feedback of high RAS-GTP levels (12).

BRAF/MEK inhibition in non-V600E mutations mostly counts in melanoma patients according to clinical practice and case reports (13). Vemurafenib activity (a BRAF inhibitor) in patients with NSCLC harboring non-V600E and V600E BRAF mutations is slightly described in literature (14). High RAS levels present in cell-lines with this class of BRAF mutations should justify some more investigation on the combination of a MEK inhibitor plus a RTK inhibitor (such as EGFR) (15,16). Other way of investigation point towards ICIs still based on retrospective data and case reports. Rittberg et al. reported a case of a rare BRAF G469A mutated NSCLC successfully treated with nivolumab (17). Dudnik et al. retrospectively investigated the PD-L1 expression, the TMB, the microsatellite instability status, and the response to ICIs in BRAF-mutant NSCLC patients. BRAF mutations were associated with high level of PD-L1 expression, low/intermediate TMB and microsatellite-stable status. ICIs showed favorable activity in both BRAF V600E and BRAF non-V600E mutant NSCLC, with an ORR of 25% and 33%, respectively (18). Similarly, Guisier et al. suggest that the efficacy of ICIs in patients with actionable mutations and in unselected population is similar (19). The Authors emphasize that among 44 BRAF-mutated patients (of whom 26 were V600E mutated) the ORR was approximately 30% (33% for non-V600E, 26% for V600E mutated patients).

BRAF-mutations could more closely mirror the impact of KRAS mutations than EGFR or ALK alterations in NSCLC. Indeed, given BRAF’s association with smoking, PD-L1 expression and a higher mutational burden, there is a biological rationale for a higher sensitivity to ICIs compared to other oncogenic drivers (20).

We present an example of good tolerance and response to immunotherapy in a non-V600E mutated patient. This case shows once again the importance of driver mutations, in order to identify the most accurate therapeutic strategy, although not always possible due to lacking evidences. Indeed, due to increased sensitivity of NGS, more mutations of unknown significance are identified in clinical practice. Moreover, immunotherapy in NSCLC patients with driver mutations has quite low level of evidence of support yet, being rigorous judgment on benefit-harm balance still needed for clinical decision.

Provenance and Peer Review: This article was commissioned by the editorial office, Precision Cancer Medicine, for the series “Uncommon Mutations in Non-Small Cell Lung Cancer”. The article has undergone external peer review.

Reporting Checklist: The authors have completed the CARE reporting checklist. Available at https://pcm.amegroups.com/article/view/10.21037/pcm-21-22/rc

Conflicts of Interest: All authors have completed the ICMJE uniform disclosure form (Available at https://pcm.amegroups.com/article/view/10.21037/pcm-21-22/coif). The series “Uncommon Mutations in Non-Small Cell Lung Cancer” was commissioned by the editorial office without any funding or sponsorship. MR served as the unpaid Guest Editor of the series. MR serves as an unpaid editorial board member of Precision Cancer Medicine from August 2020 to July 2022. The authors have no other conflicts of interest to declare.

Ethical Statement: The authors are accountable for all aspects of the work in ensuring that questions related to the accuracy or integrity of any part of the work are appropriately investigated and resolved. All procedures performed in this study were in accordance with the ethical standards of the institutional and/or national research committee(s) and with the Helsinki Declaration (as revised in 2013). Written informed consent was obtained from the patient for publication of this case report and accompanying images. A copy of the written consent is available for review by the editorial office of this journal. Local ethics committee approval was not required due to non-experimental content of the manuscript.