This case report is written in accordance with the CARE reporting checklist (available at https://pcm.amegroups.com/article/view/10.21037/pcm-21-15/rc).

The patient is a 51-year-old female who presented with worsening shortness of breath and nonproductive cough of three months duration. At the time of initial presentation, imaging revealed a left lung hilar mass measuring 2.2 cm × 1.9 cm × 1.9 cm, with a preoperative biopsy read as a low-grade salivary gland neoplasm. The patient does not smoke tobacco, but does smoke marijuana. She has no significant past medical or surgical history.

A positron emission tomography (PET) scan did not reveal the presence of a mass outside of the lung. Given the tumor’s central location, an open thoracotomy was performed with left pneumonectomy and sampling of N1 and left levels 5 and 6 lymph nodes.

Upon gross examination, the left lung weighed 244 gm and measured 21 cm × 13 cm × 8.5 cm. Sectioning of the lung revealed a 2 cm × 1.8 cm × 1.2 cm endobronchial mass present at the bifurcation of the upper and lower lobar branches. The cut surface of the mass was noted to be pink-white, firm, but slightly granular in texture. Grossly, the mass appeared confined to the bronchus (Figure 1). There was no gross evidence of necrosis. All margins were >1 cm from the mass. 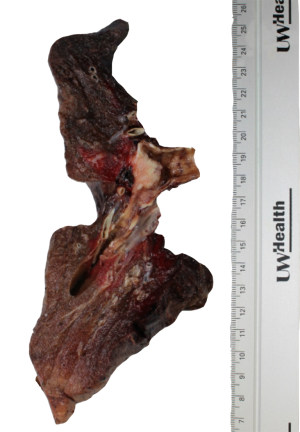 The histologic sections of the tumor revealed solid nests and tubules of tumor cells with focal cyst formation centered on the airway and partially filling the endobronchial space (Figure 2A,2B). The tumor cells showed ample eosinophilic to amphophilic finely vacuolated cytoplasm. The tubules contained brightly eosinophilic to amphophilic, colloid-like secretions (Figure 2C). The tumor nuclei were round to oval and low grade in appearance with only mild pleomorphism. Occasionally prominent nucleoli were identified. Mitotic activity was 3/10 high power fields (HPF). While the tumor did not appear to invade the lung parenchyma, lymphatic invasion was identified, and one hilar lymph node was involved by direct extension. 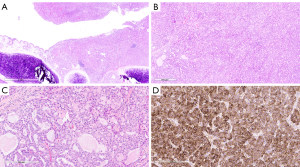 While the tumor morphology was consistent with secretory carcinoma, given the tumor’s location, alternative diagnoses were considered, including a variant of pulmonary adenocarcinoma and an unusual variant of carcinoid tumor. Immunohistochemistry using antibodies raised against S100, p40, TTF-1, synaptophysin, and chromogranin was performed to further characterize the carcinoma. The tumor was diffusely immunoreactive against S100 (Figure 2D), but showed no immunoreactivity against p40, TTF-1, synaptophysin, and chromogranin.

Following the histologic and immunohistochemical analysis of the carcinoma, molecular testing with NTRK gene fusion panel (performed at an outside reference laboratory) that uses next-generation sequencing to identify rearrangements (fusions) involving targeted regions of the NTRK1, NTRK2, and NTRK3 genes was performed, and the ETV6-NTRK3 gene fusion was identified, confirming the diagnosis of secretory carcinoma. The patient did not have an identifiable lesion elsewhere in the body and the secretory carcinoma was concluded to represent a lung primary.

All procedures performed in this study were in accordance with the ethical standards of the institutional and national research committees and with the Helsinki Declaration (as revised in 2013). Written informed consent was obtained from the patient at the time of surgical consent, for publication of this manuscript and any accompanying images. A copy of the written consent is available for review by the editorial office of this journal.

Salivary gland tumors are rare tumors with an incidence of 1.1 to 1.3 cases per 100,000 in the United States (6). They most commonly occur in the major salivary glands (parotid, submandibular, and sublingual glands), but approximately one quarter (25%) arise from the minor salivary glands throughout the head and neck region (7,8). Salivary gland-like neoplasms, morphologically identical to those described in the major and minor salivary glands, have been described in the lung, and are thought to originate from the bronchial glands lining the tracheobronchial tree. These tumors are far less common than in the salivary glands proper, comprising approximately <1% of all lung tumors (2,9). In contrast to the head and neck region where the benign pleomorphic adenoma predominates, the most commonly encountered salivary gland neoplasms in the lung are mucoepidermoid and adenoid cystic carcinomas, followed by epithelial-myoepithelial carcinoma, and then all others (2). The most recently published WHO Classification of Tumors of the Lung lists only four types of salivary gland-type tumors, mucoepidermoid carcinoma, adenoid cystic carcinoma, epithelial-myoepithelial carcinoma, and pleomorphic adenoma (10). Additional types of salivary gland tumors in the lung are largely restricted to single case reports or very small case series.

Primary lung secretory carcinoma (3,4) or metastatic secretory carcinoma from salivary gland to the lung is very rare (5). Herein, we report a case of 51-year-old female with primary lung secretory carcinoma, with lymphatic invasion and metastasis to hilar lymph node (10 L). As discussed above, this case demonstrated classical morphologic features of secretory carcinoma, showing a well-circumscribed mass that is composed of microcystic and glandular spaces with abundant eosinophilic secretions, and diffuse expression of S100 in the absence of immunostaning for TTF1, p40, and neuroendocrine markers. This immunohistochemical pattern is consistent with previous reports from Huang et al. (3) and Ramos et al. (4) although additional immunohistochemical stains including mammaglobin were performed in their studies. It has been concluded in the salivary gland, robust co-expression of mammaglobin and S100 proteins confirms the diagnosis of secretory carcinoma without need for molecular studies (22). In particular, mammaglobin has been found to be a very useful marker for differentiating secretory from acinic cell carcinoma, being strongly positive in the former and negative or at most focal weak positive in the latter (22).

In the present case, as morphologic features and immunophenotype of the tumor were consistent with secretory carcinoma, a confirmatory molecular test using next generation sequencing was performed on formalin-fixed paraffin-embedded tissue for NTRK gene fusions. The translocation t(12;15)(p13;q25), in which the ETV6 gene from chromosome 12 is rearranged with the NTRK3 gene from chromosome 15, was identified that confirmed the diagnosis of secretory carcinoma. ETV6-NTRK3 fusion was initially described in infantile fibrosarcoma and congenital mesoblastic nephroma (23), and now it has been associated with in a number of tumor types (24) including acute myeloid leukemia (25), secretory carcinoma (26), and gastrointestinal stromal tumor (27). The biological consequence of this translocation is the expression of a chimeric protein tyrosine kinase with potent transforming activity (28). While reports of some fusion- negative secretory carcinomas exist, the translocation is now believed to be present in almost 100% of true secretory carcinomas (26,29). Over recent years, NTRK fusion-targeted therapy with TRK inhibitors, such as larotrectinib or entrectinib, have proven effective in in vitro and animal studies for treating acute myeloid leukemia (24), and it has been applied to the trial treatment of secretory carcinoma (30).

Including the present case, there are now three reports of primary lung secretory carcinoma. This paucity of cases prevents drawing meaningful conclusions regarding the tumor behavior and clinical prognosis for this entity in this particular location. However, some common features have been observed in the current case and the previous two case reports (3,4). Firstly, all 3 cases occurred in middle age (range 51 to 62 years) females; secondly, both the current case and the one presented by Huang et al. (3) reported local lymph node metastasis; thirdly, increased mitotic activity has been reported in the previous two cases (6 and 10–11/10 HPF), but was lower in the case reported here (3/10 HPF).

Reporting Checklist: The authors have completed the CARE reporting checklist. Available at https://pcm.amegroups.com/article/view/10.21037/pcm-21-15/rc

Conflicts of Interest: All authors have completed the ICMJE uniform disclosure form (available at https://pcm.amegroups.com/article/view/10.21037/pcm-21-15/coif). The series “Precision Oncology Tumor Board” was commissioned by the editorial office without any funding or sponsorship. The authors have no other conflicts of interest to declare.

Ethical Statement: The authors are accountable for all aspects of the work in ensuring that questions related to the accuracy or integrity of any part of the work are appropriately investigated and resolved. All procedures performed in this study were in accordance with the ethical standards of the institutional and national research committees and with the Helsinki Declaration (as revised in 2013). Written informed consent was obtained from the patient at the time of surgical consent for publication of this manuscript and any accompanying images. A copy of the written consent is available for review by the editorial office of this journal.