The discovery of anaplastic lymphoma kinase (ALK) rearrangements in patients with non-small cell lung cancer (NSCLC) in 2007 and the subsequent development of ALK tyrosine kinase inhibitors (TKI) paved the way for precision oncology in the treatment of NSCLC (1). Crizotinib, a multi-kinase inhibitor with activity against ALK and mesenchymal epithelial transition (MET) receptors, was the first TKI to be approved by the US Food and Drug Administration (FDA) for treatment of ALK-rearranged (ALK+) NSCLC, based on PROFILE1007 and 1014 trials (2,3). The second generation ALK TKIs, ceritinib, alectinib and brigatinib are more selective and potent when compared to crizotinib. Alectinib and brigatinib have demonstrated superior efficacy in patients with ALK+ NSCLC when compared to crizotinib in treatment naïve patients (4-6). Both are now FDA approved for use in treatment naïve patients with ALK+ NSCLC. Ceritinib is also FDA approved in the first line setting based on superior progression free survival (PFS) when compared to platinum doublet chemotherapy (7). Recently, lorlatinib, a third generation ALK inhibitor showed improved PFS compared to crizotinib in treatment naïve patients (8). Moreover, next generation ALK TKIs have superior intracranial efficacy compared to crizotinib. Despite a growing portfolio of selective ALK TKIs, resistance mechanisms inevitably develop and challenges in management of disease progression remain. Herein we discuss the crucial role repeat tumor biopsy has in impacting the clinical outcomes of patients with ALK+ NSCLC.

The second generation ALK TKI, alectinib has increasingly been adopted as the first line of therapy for metastatic ALK+ NSCLC. The most common ALK dependent resistance mechanism with alectinib is the G1202R solvent front mutation, found in 29% of patients (10). Other ALK dependent resistance mechanisms include I1171T/S, and V1180L mutations in smaller proportions (12% and 6% respectively) (10). Ceritinib and brigatinib have been shown to be active against I1171T/S and V1180L mutations in preclinical studies and clinical reports (23,24). In a phase II trial of ceritinib for patients with alectinib resistant tumors, ORR was 25% and mPFS was only 3.7 months (95% CI: 1.9–5.3 months) (25). This study did not characterize post-alectinib resistance mechanisms and their correlation with clinical outcome on ceritinib. Another phase II trial of brigatinib in patients with disease progression on alectinib showed an ORR of 17% and a mPFS of only 4.4 months (95% CI: 1.8–5.6 months) (26). In this trial, 9 patients had a repeat biopsy at disease progression on alectinib, of which two had I1171N, one had I1171T, two had V1180L and one had G1202R mutations. While patients with I1171N/T and V1180L mutations had either a partial response or stable disease, the patient with G1202R mutation had disease progression as their best response to ceritinib. Both these trials were not biomarker driven. But in the latter trial, the benefit of repeat biopsy to identify resistance mechanisms in the post-alectinib setting is obvious.

Resistance to lorlatinib itself, eventually develops with, often, diverse mechanisms including compound ALK resistance mutations (28). In a patient who developed disease progression on lorlatinib, compound ALK L1198F and C1156Y mutations re-sensitized the tumor to crizotinib (29), once again highlighting the importance of repeat biopsy to ascertain resistance mechanisms. Additionally, analysis of repeat biopsies from twenty patients with lorlatinib resistance, 19 of whom had received two or more prior ALK inhibitors, showed stepwise development of compound ALK mutations conferring high-level lorlatinib resistance (30). This indicates that sequential use of ALK TKIs could select for compound ALK dependent resistance mutations to lorlatinib. Therefore, repeat biopsy at disease progression after crizotinib or second generation ALK TKIs may be valuable in strategic sequencing of TKIs in order to minimize the risk of selecting for lorlatinib-resistant compound mutations.

In about three quarters of patients who receive ALK TKIs, no ALK mutation is detected on tissue genotyping at the time of progression, indicating the presence of ALK-independent resistance mechanisms (10). Major ALK-independent resistance mechanisms include activation of bypass signaling pathways and phenotypic transformation. Activation of EGFR (epidermal growth factor receptor) and other members of HER (human epidermal growth factor receptor) receptor family has been implicated in ALK TKI resistance (9,31). However, the safety and efficacy of dual EGFR or HER2 and ALK blockade is unknown. In a patient with alectinib resistance without ALK or EGFR aberrations, MET amplification was detected by FISH (32). This patient responded to crizotinib which is also a potent MET TKI. Additionally, phenotypic changes such as epithelial-to-mesenchymal transition (EMT) and transformation to small cell lung cancer can lead to ALK TKI resistance (10). Patients with ALK-independent resistance mechanisms are less likely to respond to lorlatinib and alternative combinatorial treatment strategies may be required. However, combination regimen should be attempted on clinical trials due to increased risk of toxicities. If enrolment in a clinical trial is not feasible, patients may still derive benefit from platinum/pemetrexed with ALK TKI or localized therapy in case of oligoprogression (Figure 1) (33,34). 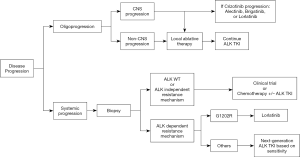 Conflicts of Interest: Both authors have completed the ICMJE uniform disclosure form (available at http://dx.doi.org/10.21037/pcm-21-5). The series “Evidence and Controversies in the treatment of metastatic NSCLC” was commissioned by the editorial office without any funding or sponsorship. The authors have no other conflicts of interest to declare.

Ethics Statement: The authors are accountable for all aspects of the work in ensuring that questions related to the accuracy or integrity of any part of the work are appropriately investigated and resolved.