Management of acquired resistance to ALK inhibitors: repeat biopsy to characterize mechanisms of resistance does not significantly impact clinical outcomes

To date, three second-generation ALK inhibitors (ceritinib, alectinib, and brigatinib) have received the approval by US FDA for front-line treatment of advanced ALK-positive NSCLC with clinical trials demonstrating remarkable response (6-9). Ensartinib, another second-generation ALK inhibitor, was also recently reported the efficacy over crizotinib in first-line therapy (13).

A third-generation ALK and ROS1 TKI, lorlatinib has shown activity against the majority of acquired resistance mutations within the ALK kinase domain, such as ALK G1202R, ROS1 G2032R (14,15). Results recently reported from the randomized phase III trial CROWN demonstrated significantly longer progression-free survival over crizotinib in the front-line setting (16).

The knowledge gained about resistance mechanisms has guided scientists in discoveries that led to the rapid journey of ALK-targeted drug development. With increasing treatment options, the decision of treatment sequence has become more and more complex in ALK-positive patients in order to achieve the longest survival outcome. This article provides the position that currently, the clinical benefit of treatment sequencing in this group of patients can be achieved regardless of rebiopsy procedures at the time of disease progression.

The second-generation ALK inhibitors (ceritinib, alectinib, brigatinib, and ensartinib) were initially designed to overcome the secondary mutations from crizotinib resistance, for example L1196M, or ALK G1202R mutation (17). Currently, they are approved to treat ALK-positive patients as the first-line treatment, except ensartinib which has not been approved yet.

Gainor et al. reported the acquired resistance mechanisms of second-generation ALK inhibitors. They found ALK resistance mutations in 54% of patients post-ceritinib treatment, in 53% of patients post-alectinib treatment, and in 71% of patients post-brigatinib treatment. The different spectra of the ALK-dependent resistance mutations were C1156Y, I1171T/N/S, F1174L/C, V1180L, L1196M, G1202R, G1202del, D1203N, S1206Y/C, and E1210K (Figure 1) (18). G1202R was found 21%, 29%, and 43% in post ceritinib, alectinib, and brigatinib, respectively (18). Indeed, consistent with preclinical data, ALKG1202R emerged as the most common ALK resistance mutation among patients receiving second-generation ALK inhibitors. These solvent-front mutations (G1202R, G1202del, D1203N, and S1206Y/C) impair drug binding through steric hindrance (19). Several studies have demonstrated that G1202R confers high-level resistance to first- and second-generation ALK inhibitors (18,19). The other resistance mutations affect residues adjacent to the N-terminus (C1156Y) and C-terminus of the αC-helix (F1174C/L/V) which may enhance the kinase’s ATP-binding affinity and increase its enzymatic activity (18,19). The I1171T/N/S mutations also distort the αC-helix to interfere with TKI binding (18,20). ALK amplification has not yet been reported as a resistance mechanism after second-generation ALK inhibitors (18). Drug efflux pump (P-glycoprotein; P-gp) overexpression is one of ALK-independent resistance mechanisms which could significantly limit the CNS penetration of crizotinib and ceritinib (21) whereas alectinib is not a P-gp substrate thus able to achieve higher CNS levels (21). Bypass track activation (EGFR, HER2, PIK3CA, CKIT, BRAF, DDR2, FGFR2, NRAS and MET alterations), together with lineage change by transforming to small cell lung cancer are also the ALK-independent (off-target) resistance mechanisms (18,22). 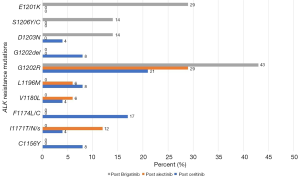 In the clinical phase II study of lorlatinib, there were 6 expansion cohorts using lorlatinib as the second- or later- line treatment. The cohort of patients with post-crizotinib failure (cohort 2 and 3A) demonstrated overall response rate (ORR) of 72.9%, and intracranial response rate (icORR) of 70.3% with median PFS of 11.1 months (11), whereas in the post non-crizotinib setting, either as the second- or late- line treatment (cohort 3B), lorlatinib showed ORR of 42.9% and icORR of 46.2%. Furthermore, the cohort of patients heavily pretreated by more than one ALK inhibitors (cohort 4–5) revealed an ORR of 39.6%, icORR of 48.1% and median PFS of 6.9 months (11). Lorlatinib was active against all known ALK resistance mutations including G1202R both in single and compound mutations with an ORR of 57%, median duration of response (DOR) of 7 months and median PFS of 8.2 months (Table 1) (25). One third of patients in this study harbored compound ALK resistance mutations. The authors compared the efficacy of lorlatinib in second-generation ALK TKIs failure and heavily pretreated patients with either one ALK mutation or compound ALK mutations. Results showed higher ORR (75% vs. 56%), longer median DOR (24.4 vs. 6.1 months) in patients with only one ALK resistance mutation (25). Although tumor genotyping for ALK mutations in patients who had failed from a second-generation ALK inhibitor may predict the response from lorlatinib, the efficacy of lorlatinib in patients with post-crizotinib treatment was comparable between patients with and without ALK mutations by using tissue, or plasma genotyping (25).

A recent huge multicentre real-world data with a total of 76 advanced ALK-positive NSCLC patients, among patients treated with less than two previous TKIs, two or more previous TKIs, and three or more previous TKIs, the ORR and mPFS were 42% and not reached (NR), 35% and 11.2 months,18% and 6.5 months, respectively. The ORR and mPFS were 13% and 9.2 months for patients treated with one second-generation ALK inhibitor as the only ALK TKI received. The icORRs were 35% for 52 ALK-positive patients and the mPFS was 9.3 months for patients with leptomeningeal carcinomatosis (26).

Based on the robust results of lorlatinib in several settings (post crizotinib, post second generation ALK inhibitors, and heavily pretreated patients with more than one ALK TKIs), lorlatinib has been approved by US FDA for treatment in ALK-positive metastatic NSCLC patients who were previously treated with ≥1 ALK inhibitors without requirement for biomarker testing to demonstrate specific resistance mutations, unlike the initial osimertinib approval as second-line treatment predicated on finding the EGFR T790M resistance mutation after 1st or 2nd generation EGFR TKI therapy.

Lorlatinib-resistant molecular profile was explored at Massachusetts General Hospital (MGH) in 20 heavily pre-treated patients with lorlatinib treatment failure. The investigators found 50% of compound ALK resistance genes, with either double or triple mutations in acquired resistance to lorlatinib. ALK-independent mechanisms of resistance were thought to mediate resistance in patients who did not demonstrate any ALK resistance mutation. In addition, 2 patients’ tumors “lost” their lorlatinib-sensitive mutations (I1171N, G1202R) post-lorlatinib. There was no small cell transformation (27). Resistance to ALK inhibition is a dynamic and clonal process. In one patient case, a founder ALK C1156Y clone in the lorlatinib pretreatment tumor led to a double-mutant subclone (ALK C1156Y–L1198F) in the post-lorlatinib tumor upon disease progression (28). This acquired L1198F mutation conferred resistance to lorlatinib, but unexpectedly restored sensitivity to crizotinib, a less potent and less selective first-generation inhibitor. These results highlight the usefulness of developing multiple, structurally distinct inhibitors that target the same oncogenic kinase domain. When resistance develops to third-generation TKI, repeat biopsy can provide crucial information as to whether sequential treatment with a different ALK inhibitor may be also effective afterward.

The current therapeutic paradigm for advanced ALK-positive NSCLC is to treat with sequential ALK inhibitors, nowadays starting with one of the second-generation ALK TKIs as the first-line treatment then follow by third-generation ALK inhibitor, instead of starting with first-generation ALK TKI. Although this treatment approach has dramatically improved the survival of patients, third-generation acquired resistance invariably develops and leads to clinical progression. As lorlatinib potentially moves into the first-line setting, rebiopsy to characterize resistance mechanisms might be necessary to determine the role of earlier generation ALK TKIs in this setting. However, re-biopsy at the time of 1st or second-generation treatment failure to characterize mechanisms of resistance does not significantly impact clinical outcomes at this time as discussed above.

Conflicts of Interest: Both authors have completed the ICMJE uniform disclosure form (available at http://dx.doi.org/10.21037/pcm-2020-mnsclc-09). The series “Evidence and Controversies in the treatment of metastatic NSCLC” was commissioned by the editorial office without any funding or sponsorship. The authors have no other conflicts of interest to declare.