Lung cancer is the leading cause of cancer related death worldwide (1). Non-small cell lung cancer (NSCLC) accounts for 80% of all lung cancer cases and 55% of NSCLC is metastatic at the time of diagnosis (2). Fortunately, the advent of targeted therapy and immunotherapy has introduced a new era in the treatment of metastatic NSCLC (mNSCLC). In addition to epithelial growth factor receptor (EGFR) and anaplastic lymphoma kinase (ALK), V600E mutant BRAF protein has emerged as a target of therapy in mNSCLC in combination with mitogen-activated protein kinase (MEK) inhibitors. In June 2017, the combination of dabrafenib and trametinib was approved for the treatment of BRAFV600E-mutant mNSCLC (3). Similarly, great strides have been made at the immunotherapy front with the approval of immune checkpoint inhibitors (ICI) for the treatment of mNSCLC. In October 2016 and September 2019, pembrolizumab was approved as monotherapy for the first-line treatment of mNSCLC with programmed death ligand-1 (PD-L1) expression of greater than 50% and 1% respectively (4,5). Most recently, in May 2020, atezolizumab received approval for the first-line treatment of mNSCLC with high PD-L1 expression (6). Since BRAF/MEK inhibitors and ICI both appear to be effective in the first-line treatment of mNSCLC, debate has ensued on the best treatment approach for patients with BRAFV600E-mutant mNSCLC and high PD-L1 status.

BRAF is a serine/threonine kinase in the MAPK/ERK pathway (7). BRAF dimerization, induced by RAS, leads to the activation of MEK which subsequently activates the downstream target ERK (7). ERK, once activated on the cytoplasmic surface of the nuclear membrane, is internalized into the nucleus and triggers cell proliferation and differentiation (7). BRAFV600E mutations constitutively lead to increased activation of the MEK/ERK pathway, evasion of senescence and apoptosis and subsequent cell proliferation, independent of KRAS signaling (7). BRAF gene mutations are detected in 2% of all NSCLC, half of which are V600E mutations which lead to glutamic acid substitution for valine at the 600th amino acid of BRAF protein (8). Patients with BRAFV600E mutation are typically current or former smokers (9). This is unlike traditional markers of targeted therapy such as EGFR or ALK mutations which are common in nonsmokers or former light smokers (9).

BRAF/MEK inhibitor combination therapy works by inhibiting the upstream (BRAF) and downstream (MEK) activating signals of ERK (8). Dabrafenib is a tyrosine kinase inhibitor that inhibits the V600E mutant BRAF protein while the addition of trametinib, a MEK inhibitor, is shown to increase the efficacy of dabrafenib in pre-clinical and clinical studies (8). The combination of dabrafenib and trametinib has been used in the treatment of unresectable and metastatic BRAFV600E-mutant melanoma (10). This combination was approved for the first-line treatment of mNSCLC based on the results of a phase 2 study of patients with BRAFV600E-mutant mNSCLC previously untreated for their metastatic disease (Table 1) (3). This non randomized, open label, multicenter study enrolled 36 patients with BRAFV600E-mutant mNSCLC. Patients received oral dabrafenib 150 mg two times daily and oral trametinib 2 mg daily. Scans were followed every 6 weeks. The primary endpoint was overall response rate (ORR) and secondary endpoints were progression free survival (PFS), duration of response (DOR) and overall survival (OS). At a median follow up of 15.9 months, investigators reported an ORR of 64% (complete response- 6%, partial response 58%), median PFS of 10.9 months, DOR of 10.4 months and median OS of 24.6 months. Although this is not a head-to-head study comparing outcomes of BRAF/MEK directed therapy to standard of care, the efficacy exceeds what is expected from standard chemotherapy.

Similar to the increased efficacy of BRAF/MEK inhibitors, ICIs have shown promising results in the treatment of mNSCLC. ICIs bind to PD-1 on T lymphocytes or PD-L1 on tumor cells (TC) (12). PD-L1 is expressed on normal cells that, upon binding PD-1 on T-lymphocytes, inhibits their cytotoxic function (12). PD-L1 is overexpressed on malignant cells allowing them to evade cytotoxic T-lymphocytes (12). Pembrolizumab is a PD-1 inhibitor while atezolizumab is a PD-L1 inhibitor, both inhibiting the ability of malignant cells to evade cytotoxic T-lymphocytes (12). 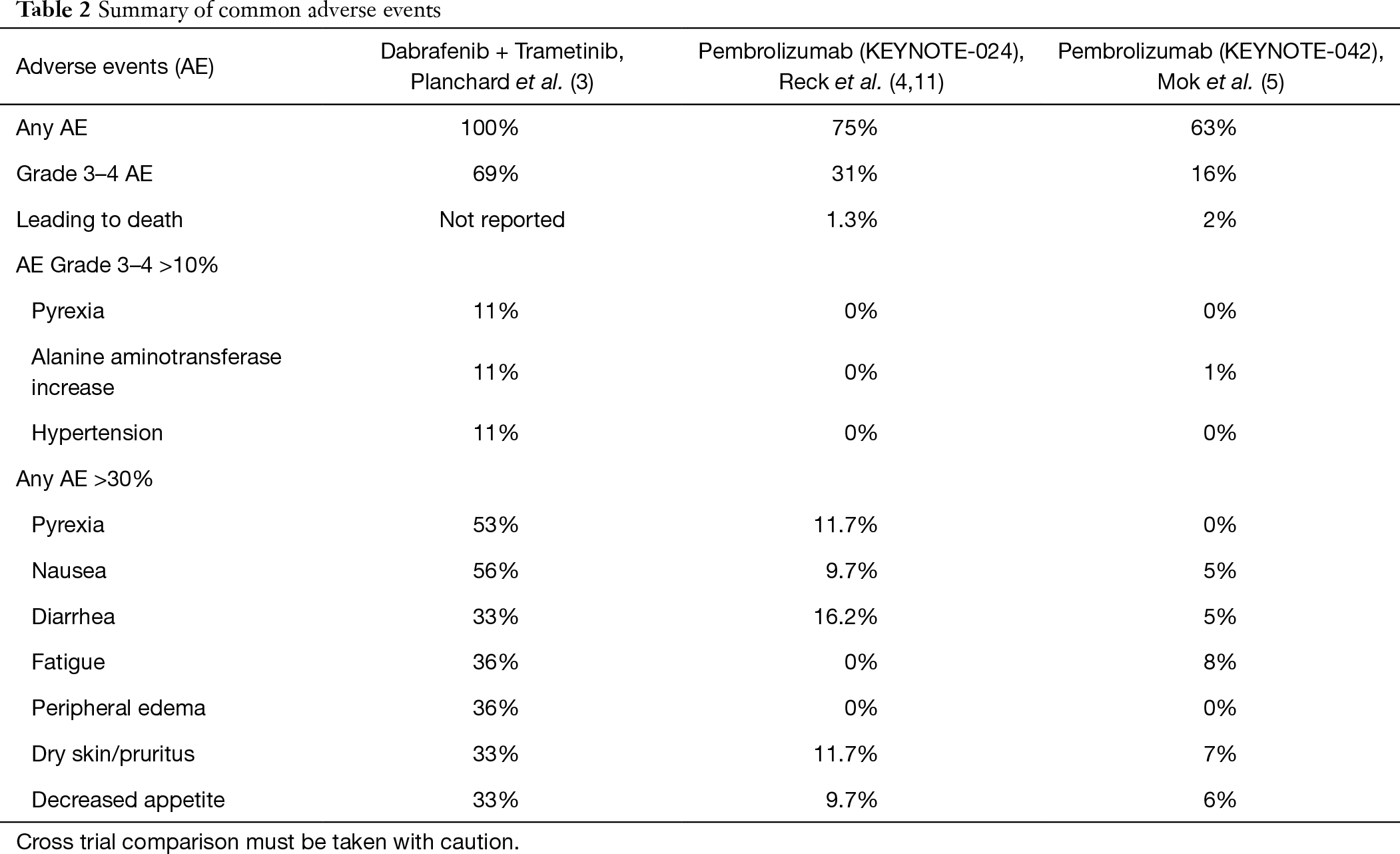 Furthermore, some limitations of studies of dabrafenib/trametinib and pembrolizumab should be noted. Firstly, dabrafenib/trametinib has only been studied in phase 2 trials with a small number of patients (3). Therefore, results related to survival must be interpreted with caution. Pembrolizumab and atezolizumab, contrarily, have shown PFS and OS benefit in randomized, phase 3 studies (5,6,11). Therefore, survival benefit with these therapies in mNSCLC with high PD-L1 expression appears unequivocal when compared to standard chemotherapy. Secondly, it is unclear how many patients in the pembrolizumab and atezolizumab studies carried a BRAFV600E-mutation (4-6). Although we know that single agent ICIs typically have lower efficacy in ALK and EGFR mutated NSCLC, this may not be necessarily true for BRAF mutated NSCLC. For example, a retrospective study of 58 patients showed that the ORR with ICIs was 3.6% vs. 23.3% in patients who were EGFR and/or ALK-positive vs. EGFR and ALK-negative respectively with PD-L1 status ≥1% (15). However, median PFS was similar in both groups with 2.07 vs. 2.58 months respectively. Similarly, another retrospective study of 551 patients treated with ICIs showed an ORR of 0% and 12% for ALK-positive and EGFR-positive patients (9). Median PFS was similar to the prior study with 2.5 months and 2.1 and median OS of 17 months and 10 months for ALK-positive and EGFR-positive groups respectively (9). This study showed a higher ORR in the BRAF mutated group at 28% compared to ALK and EGFR mutated groups with median PFS of 3.1 months and median OS of 13 months (9). However, the PFS and OS were lower than what were observed in phase 3 studies of pembrolizumab and atezolizumab in treatment of patients unselected for BRAF mutation and PD-L1 high status (PFS 5.4–5.8 months, OS 16.7–17 months) (5,6,13).

Lastly, the safety of sequential use of ICI with BRAF/MEK inhibitors must be taken into consideration. A retrospective analysis of 41 EGFR-positive patients sequentially treated with EGFR inhibitors and ICI showed an increased risk of grade 3–4 pneumonitis (4/41) in patient who received ICI prior to receiving EGFR inhibitor while no IRAEs were observed in the group receiving EGFR inhibitors first (16). Therefore, in EGFR-positive patients, the preferred course of treatment is to use EGFR inhibitors as first-line treatment even if PD-L1 expression is high. Furthermore, a phase 1/2 study of nivolumab plus crizotinib demonstrated an increased risk of grade 3–4 immune meditated hepatitis (5/13) in ALK-positive patients requiring the study to be terminated (17). Therefore, the combination of ICIs with ALK inhibitors is generally discouraged. In contrast to the observed increase in IRAEs with ICI and EGFR and ALK inhibitors, the use of BRAF/MEK inhibitors with ICI appears feasible. The tolerability of vemurafenib and cobimetinib in combination with atezolizumab was demonstrated in the IMspire150 study of unresectable or metastatic melanoma (18). The study compared BRAF/MEK inhibitors in combination with atezolizumab or placebo. The combination arm showed better PFS (15.1 vs. 10.6 months, HR 0.78, 95% CI, 0.63–0.97) without significant increase in IRAEs and led to the FDA approval of atezolizumab in combination with vemurafenib and cobimetinib in this population. Both groups experienced grade 3–4 adverse events of 73–79% while the combination group experienced a slightly increased risk of elevated aminotransferase levels (8% vs. 4%). Though this study was conducted in patients with melanoma, it signifies the tolerability of combined and/or sequential use of BRAF/MEK inhibitors with ICI. Furthermore, other smaller retrospective studies have also demonstrated the safety and efficacy of ICI in mNSCLC patients harboring BRAF mutation (19,20). Therefore, in the case of very high PD-L1 status mNSCLC, it may be reasonable to start treatment with ICI and switch treatment to BRAF/MEK inhibitors at progression of disease. Studies of trametinib in combination with pembrolizumab are ongoing (NCT03299088 and NCT03225664) in patients with KRAS mutated NSCLC in metastatic and recurrent disease.

Funding: No direct funding has been made available for this study. Outside of this study, MN has been awarded the 2020 Karmanos Cancer Institute Cancer Immunology and Immunotherapy Pilot Award (P30 CA022453).

Conflicts of Interest: All authors have completed the ICMJE uniform disclosure forms (available at: http://dx.doi.org/10.21037/pcm-2020-mnsclc-03). The series “Evidence and Controversies in the treatment of metastatic NSCLC” was commissioned by the editorial office without any funding or sponsorship. AS serves on the advisory board for Merck and Eisai. He has received study funding from Eisai. MN serves on the advisory board for AstraZeneca, Caris Life Sciences, Daiichi-Sankyo, Takeda, Novartis, EMD Serono, Blueprint Medicines and has received study funding from Tempus. The authors have no other conflicts of interest to declare.