Colorectal adenocarcinoma (CRC) recorded the fourth highest cancer incidence as well as mortality rates among all cancers in the US for the year 2018, with a median 5-year survival of 64.4% (the SEER database). Amplification of the ERBB2 (HER2/Neu) locus on chromosome 17(q) has been reported in 2–11% of CRC (1,2). The 185-kDa HER2 molecule belongs to the epidermal growth factor receptor (EGFR) family of transmembrane tyrosine kinase receptors, undergoing autophosphorylation secondary to receptor autodimerization in absence of ligand binding (3). In cancer cells, overexpressed HER2 also forms heterodimers with other closely related binding partners HER1, 3 and 4, leading to a downstream phosphorylation of the SH2 domain of SRC kinase, thus activating the PI3K-AKT-ERK mediated pro-proliferative signaling cascade (4,5). Although these tumors are generally associated with other gene mutations (APC, TP53, KRAS, PI3KCA) and tend to have a worse prognosis (6,7), recent clinical trials have demonstrated benefit in overall survival of patients treated with HER2-targeted therapy, especially those with KRAS wild-type metastatic colorectal carcinoma (8). Targeting the extracellular domains of overexpressed HER2 receptors with humanized monoclonal antibody, trastuzumab, and more recently using pertuzumab, leads to antibody-dependent cellular cytotoxicity, cell-cycle arrest and impaired DNA repair leading to apoptosis (4,9,10).

In routine surgical pathology, CRC is identified by its complex cribriforming glandular architecture with characteristic “dirty” necrosis. HER2/Neu amplification in CRC can be diagnosed by using immunohistochemical staining for HER2 protein overexpression, fluorescence in situ hybridization, or next-generation sequencing. Once identified, the decision to initiate anti-HER2 therapy depends on multiple clinical and molecular parameters as well as chances of resistance. In this case review, we underscore the complexities of this decision process and how precision medicine interfaces in real time with individualized cancer therapy. We present the following article in accordance with the CARE reporting checklist available at http://dx.doi.org/10.21037/pcm-2020-potb-04. 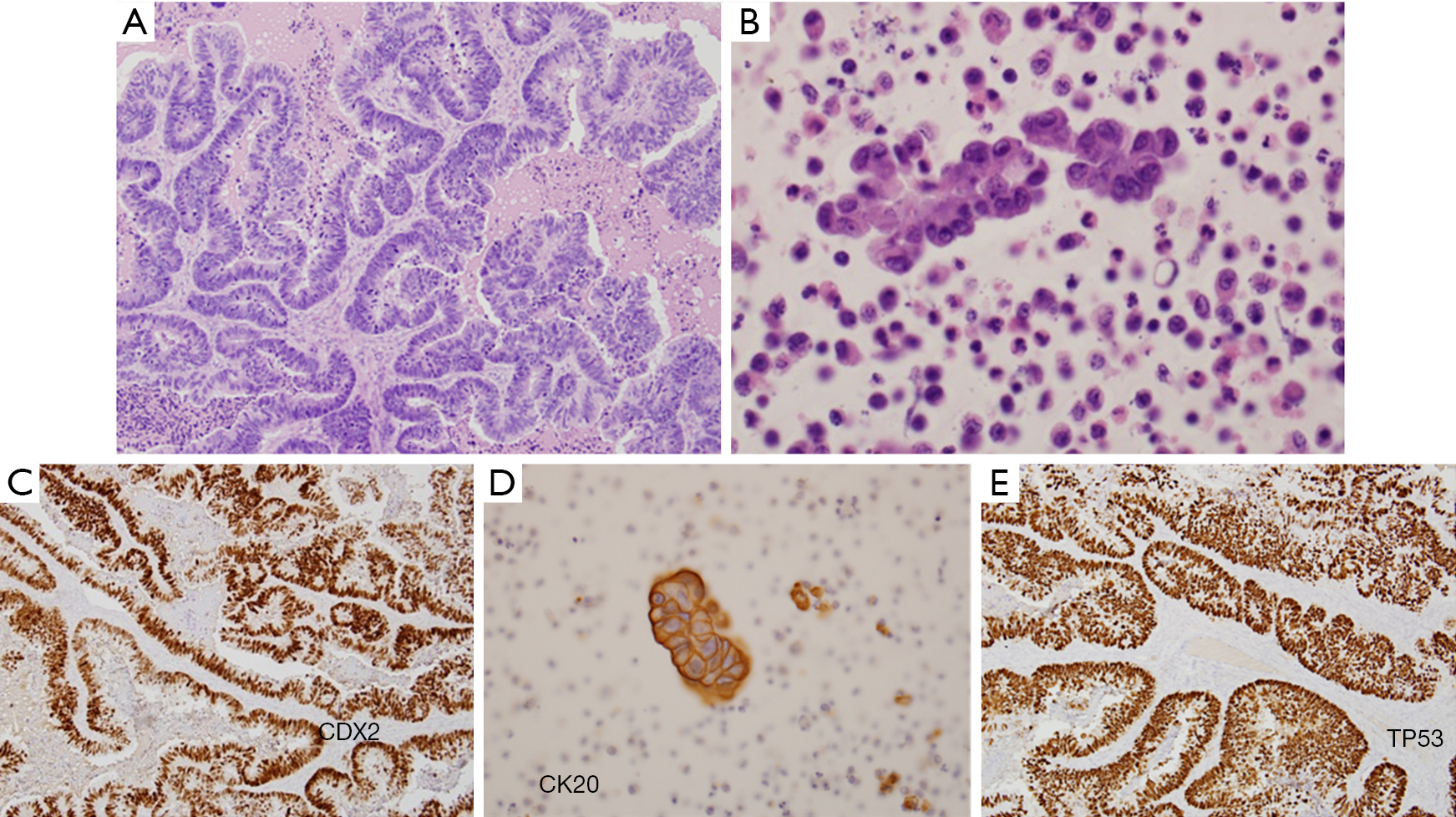 PET scan demonstrated the hypermetabolic primary sigmoid colon adenocarcinoma, as well as hypermetabolic nodal metastases in the mesentery and external iliac chain on the left, and hypermetabolic pulmonary metastases on the left upper lobe. The patient was started on chemotherapy with the mFOLFOX-6 regimen (Folinic acid, Fluorouracil and Oxaliplatin) and bevacizumab, but she subsequently developed an adverse reaction to oxaliplatin. Thus, therapy with FOLFOX was stopped after six months.

Thereafter, the patient underwent palliative sigmoidectomy with lymph node dissection. Histology revealed moderately differentiated invasive adenocarcinoma following neoadjuvant therapy (Figure 2), with negative surgical resection margins, prominent lymphovascular and perineural invasion, and nodal metastasis. She was initiated on maintenance Capecitabine chemotherapy which she did not tolerate well; thus, the treatment was changed to 5- Fluorouracil (5-FU). CT imaging done between her third and fourth cycle of 5-FU revealed multiple new and/or enlarging pulmonary nodules, new ascites and peritoneal metastasis. Subsequently, there was progression of disease while off therapy as CT imaging showed growing lymph node at the aortic bifurcation and increase in size and number of peritoneal metastasis since and multiple hepatic (Figure 3A) and splenic lesions. She was started on a FOLFIRI regimen with bevacizumab. 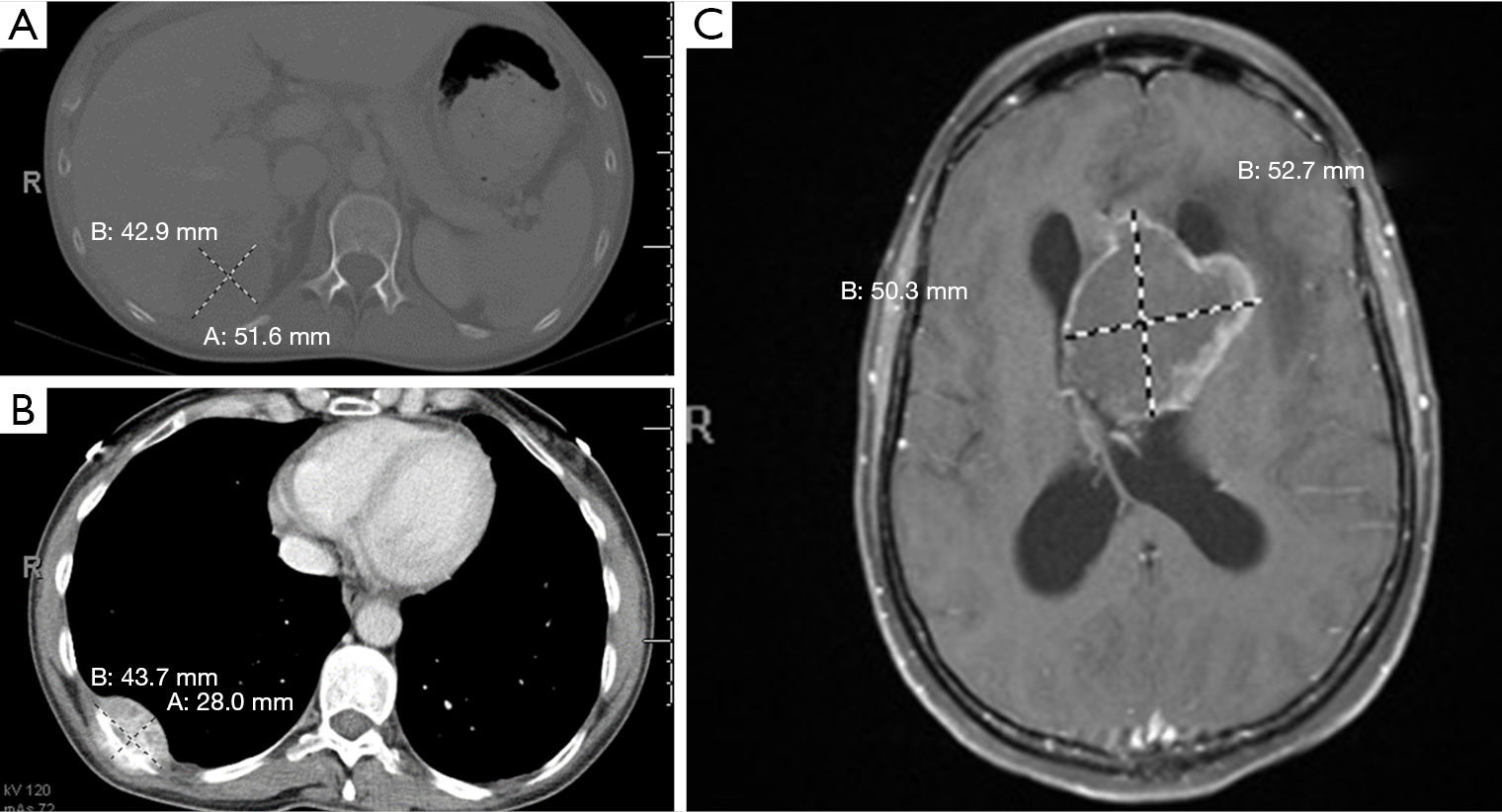 Figure 3 Metastatic lesions in the liver (A) and ribs (B) on CT imaging and brain ventricular metastasis (C) on MR imaging.

Six months later, the patient underwent next-generation sequencing (NGS) of the tumor from an external institution, which confirmed the missense mutation in TP53 (c.524G>A; p.R175H), and also revealed an ERBB2/HER2 amplification plus an APC single base pair frameshift deletion leading to loss of function. Based on this tumor genetic profile, she was enrolled in a clinical trial encompassing dual HER2-directed therapy with trastuzumab and pertuzumab (NCT02091141 protocol 2014-0459) (8). The patient’s tumor demonstrated radiologic progression in the form of a growing right rib nodule, indicating resistance to HER2-directed therapy (Figure 3B). Subsequently, the patient was taken off the trial within five months of her enrollment.

A little over 9 months after the patient was taken off the clinical trial, she developed a left lateral ventricle brain metastasis on MR imaging (Figure 3C). She underwent stereotactic radiosurgery of the left ventricle mass, which was histologically confirmed as metastatic adenocarcinoma (Figure 2B), consistent with colonic primary. Molecular testing of the brain mass by Foundation One for pathologic alterations detected the previously identified TP53 missense mutation, ERBB2 amplification and APC frameshift. An additional splice site mutation (c.1899-2A>T) was identified in ERBB2, which is predicted to cause in-frame skipping of exon 16 (HER2-del16). This mutation was not detected/reported by the outside institution NGS which called the ERBB2 amplification and provided eligibility for the anti-HER2 therapy clinical trial. Based on this new information, archived data from the patient’s 2015 NGS testing at the University of Minnesota was re-analyzed for ERBB2, which demonstrated that this mutation had in fact been present prior to anti-HER2 therapy. The metastatic tumor had no PDL1 expression, thus immune checkpoint inhibition was not a viable strategy. In June 2018, the patient succumbed to worsening metastatic disease burden. The timeline of the clinical course of the patient is summarized in Figure 4. All procedures performed in studies involving human participants were in accordance with the ethical standards of the institutional and national research committees and with the Helsinki Declaration (as revised in 2013). The case study was conceptualized and initiated after the demise of the patient, leading to a waiver of consent.

Figure 4 Timeline of the clinical course of the patient.

HER2/Neu monomeric subunit consists of an N-terminal extracellular ligand binding region, a C-terminal intracellular domain with tyrosine kinase activity, and a linking transmembrane domain (14). The extracellular region has four domains, out of which the first and the third domains are involved in ligand binding. The second domain is responsible for receptor dimerization, while the fourth (juxtamembrane) domain has an autoinhibitory function (15). HER2-directed antibody therapy targets the extracellular regions. While Trastuzumab binds the fourth (juxtamembrane) domain to inhibit HER2 autophosphorylation, Pertuzumab binds the second (receptor dimerization) domain to inhibit HER2 homodimerization and heterodimerization with other closely related binding partners HER1, 3 and 4, thus causing a synergistic antitumor effect in combination therapy (16). Small molecule inhibitors like gefitinib and lapatinib, acting intracellularly, block the transphosphorylation of the tyrosine kinase domains (17,18).

The 40.6 Mbp wild-type ERBB2 locus (NC_000017) consists of 27 exonic regions which encode a protein with 1255 amino acids (19). The N-terminal extracellular domains are encoded by exons 1–16, exon 17 codes for the transmembrane domain and the downstream exons 18–27 codes for the intracellular domains and the C-terminal (20). HER2 amplification may be associated with expression of wild-type HER2 or with other HER2 variants such as activating HER2 mutations or alternative splice variants of HER2 (21). In HER2 amplified breast cancer, an alternative splice variant, designated as HER2-del16, has been identified in approximately 2–9% of cases (22). The HER2-del16 variant is a highly penetrant oncogenic alteration, which arises from transcriptional skipping of exon 16 due to alternative splicing (23). This alternative splice variant is a result of a single nucleotide variant in the canonical splice site (Figure 5) (24). The resultant HER2-del16 protein lacks a portion of its juxtamembrane domain consisting of 16 amino acids (634-649), including two cysteine residues, leading to an imbalance in the number of cysteine residues in the extracellular domain (25). The exposed unpaired cysteine thus forms a stable constitutively active HER2-del16 homodimer, with upregulation of downstream tyrosine kinase signaling cascade starting with SRC kinase phosphorylation (Figure 6) (23). HER2-del16 also forms a transactivating heterodimer with HER1 (EGFR), with subsequent AKT and ERK phosphorylation (26).

Figure 5 Schematic of wild-type HER2 (A) and HER2-del16 (B) mRNA splicing and final protein product. 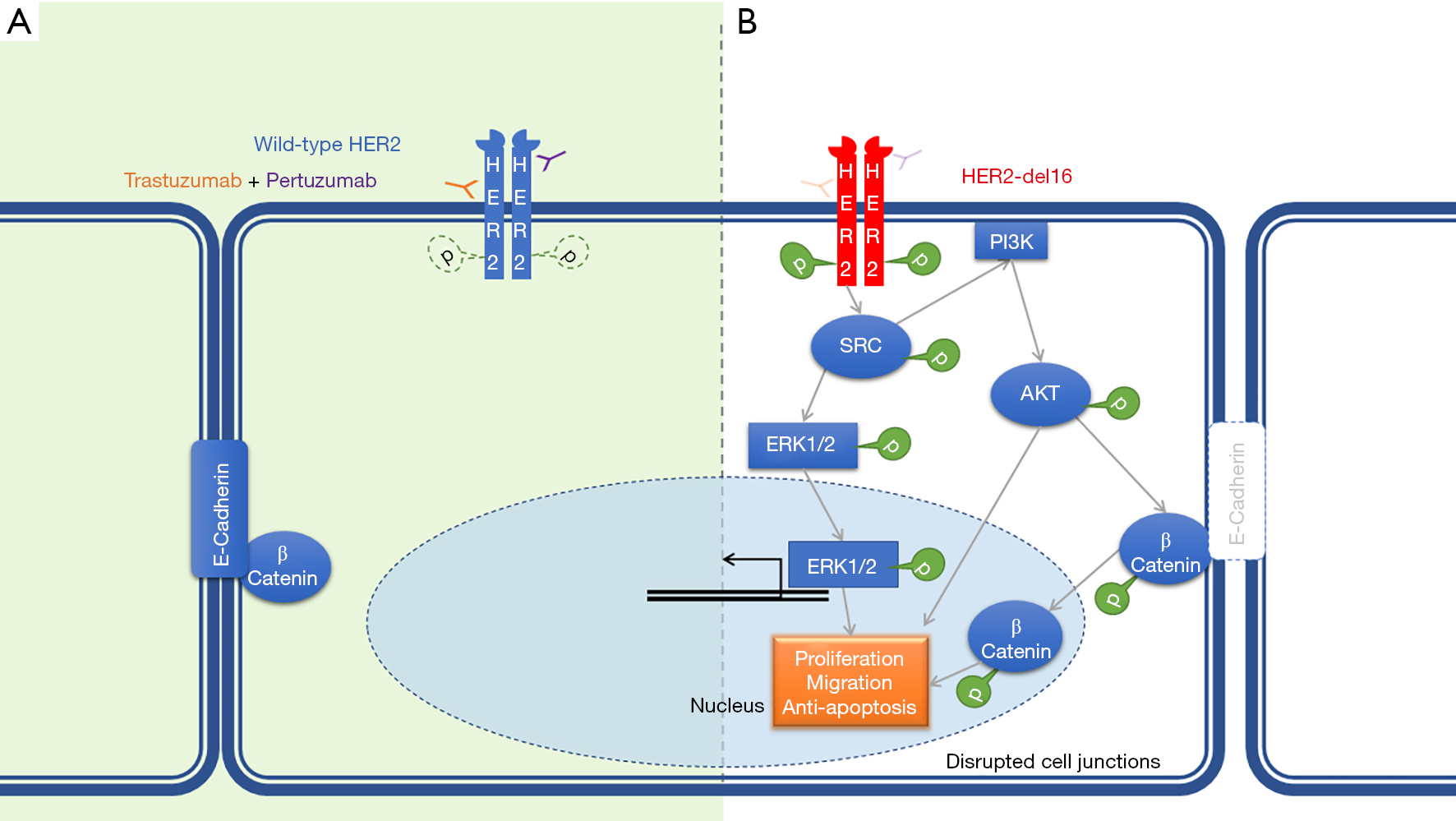 HER2-del16 splice variant is a tumor specific event that may lead to resistance to trastuzumab therapy (27,28). In the transformed embryonic human kidney cell line HEK-293 transfected with HER2-del16, there is reduced trastuzumab binding to the mutant receptor. However, when those cells were treated with an increasing concentration of β-mercaptoethanol, which leads to loss of disulfide bridges, there was increasing trastuzumab binding to the mutant receptor suggesting epitope masking as the mechanism of resistance (22). In the breast cancer cell line MCF-7 transfected with HER2-del16, trastuzumab resistance is overcome by treatment with dasatinib, a small molecule SRC kinase inhibitor (29).

In animal models, the effects of HER2-del16 variant are conflicting. HER2-del16 transgenic mice and SCID-beige mice xenografted with MCF-7 cells expressing HER2-del16 developed mammary gland tumors and pulmonary metastasis, but were sensitive to trastuzumab therapy (25,30). The discrepancy between in vitro and in vivo response to trastuzumab is attributed to the presence of a host immunological response in vivo triggered against the tumor cells (23). Thus, there is preclinical rationale for both resistance and sensitivity to trastuzumab therapy, with additional benefit conferred by tyrosine kinase inhibitors and SRC kinase inhibitors (23). There is no clinical or preclinical data on the HER2-del16 splice variant and pertuzumab sensitivity. Since pertuzumab acts by inhibiting extracellular domain II-dependent receptor dimerization, it can be hypothesized that the presence of HER2-del16 leads to a bypass of pertuzumab action by the formation of stable transactivating heterodimers, in an extracellular domain IV-dependent manner (26). In the patient discussed here, it can be argued that identification of the HER2-del16 splice variant prior to initiation of trastuzumab therapy would have raised the possibility of consideration of additional small molecule kinase inhibitors in the treatment regimen.

The loss of function APC somatic mutation identified in the patient leads to loss of cytoplasmic sequestering and degradation of β-catenin by the APC-GSK-Axin complex, resulting in β-catenin nuclear translocation and upregulation of pro-proliferative WNT signaling cascade (31). The hypothetical “second hit” identified in the patient, a TP53 p.R175H missense mutation, is a frequently encountered missense somatic mutation in solid tumors (~80%) resulting in an unfolded p53 conformation with reduced DNA binding (32). This mutation not only leads to loss of p53 tumor suppression function via a dominant negative effect on wild-type p53 trapped in heterologous tetrameric complexes, but also causes gain of function to further promote pro-proliferative signaling, invasion and resistance to cytotoxic chemotherapy (33). Therapeutic approaches using small molecules for reactivating p53 and inducing apoptosis (RITA, PRIMA) are undergoing clinical trials and will be crucial in determining more efficacious chemotherapy regimens for the more than 50% of cancer patients harboring TP53 mutations (32,34,35).

In conclusion, due to multiple genomic events identified in this patient that had significant therapeutic implications, understanding therapy response and predicting efficacy of possible targeted therapies were extremely challenging, dynamic decisions. The mutant APC, TP53 and HER2-del16, along with HER2 amplification, were the key genomic alterations in this tumor resistant to multiple types of chemotherapy. With the presenting diagnosis of Stage IV disease (AJCC 7th Edition), there was little margin of error in identifying the appropriate therapy for the patient. The key challenges in this case were the combination of common and rare genomic events, alterations in multiple tumor suppressors and proto-oncogenes, and discrepancy in existing preclinical and clinical literature on targeted therapy outcome, representing an extremely complex scenario in precision medicine management.

Provenance and Peer Review: This article was commissioned by the Editorial Office, Precision Cancer Medicine for the series “Precision Oncology Tumor Board”. The article was sent for external peer review organized by the Guest Editor Dr. Balazs Halmos and the editorial office.

Reporting Checklist: The authors have completed the CARE reporting checklist available at http://dx.doi.org/10.21037/pcm-2020-potb-04

Conflicts of Interest: All authors have completed the ICMJE uniform disclosure form available at http://dx.doi.org/10.21037/pcm-2020-potb-04. The series “Precision Oncology Tumor Board” was commissioned by the editorial office without any funding or sponsorship. The authors have no other conflicts of interest to declare.

Ethical Statement: The authors are accountable for all aspects of the work in ensuring that questions related to the accuracy or integrity of any part of the work are appropriately investigated and resolved. All procedures performed in studies involving human participants were in accordance with the ethical standards of the institutional and national research committees and with the Helsinki Declaration (as revised in 2013). The case study was conceptualized and initiated after the demise of the patient, leading to a waiver of consent.