Liver cancer is highly fatal, and the mortality in the US is reported to be increasing faster than any other malignancy (1,2). Only 1 in 5 patients survives 5 years after diagnosis (3). Hepatocellular carcinoma (HCC) is one of the most common type of primary liver cancer. In contrast, hepatic lymphoepithelioma-like carcinoma (LELC) is rare. Primary hepatic LELC consists of 2 distinct types: lymphoepithelioma-like cholangiocarcinoma (LEL-CC) and lymphoepithelioma-like HCC (LEL-HCC). To date, 66 cases of LEL-HCC have been reported but only 27 LEL-CC reported. Overall, patients with LEL-HCC were mostly males (64%), and LEL-CC were mostly females (67%). Interestingly, patients with LEL-CC are often associated with Epstein-Barr virus (EBV) infection (74%) (4).

Histologically, LELCs are poorly differentiated, and characterized by heavy lymphoid infiltration. Tumor cell nuclei are usually vacuolated with a single large nucleolus. Since its first description in the nasopharynx in 1982 (5), many cases of LELC were subsequently reported in different sites, such as breast (6), urinary bladder (7), stomach (8), colon (9), lung (10), etc. However, primary hepatic LELC is rarely reported according to the PubMed search. EBV is more common in lymphoepithelioma-like gastric carcinoma (GC) than hepatic LELC (11), and hepatic LELC with EBV infection occurs more frequently in men, with a median age of 58 years (4). Herein, we reported a case of 39-year-old woman diagnosed with LEL-HCC with EBV infection, with further literature review to enhances our understanding the disease.

The case was of a previously healthy 39-year-old woman. She had a one-month history of abdominal pain without obvious cause and weight loss. MRI study was performed during a routine examination and it revealed a space-occupying lesion in the left lobe of liver. Laboratory examination showed serum levels of alanine aminotransferase (ALT) and aspartate aminotransferase (AST) being elevated. Subsequently, the patient underwent surgery with complete tumor resection with clear margins (Figure 1).

Macroscopically, the resected liver portion contained a gray-white nodular lesion measuring 15 mm × 12 mm × 10 mm. There were no satellite nodules or intravascular tumor thrombi. Microscopic examination showed that the tumor cells were arranged in nest and sheets, as well as glands with lumen focally, and abundant lymphocytes infiltrating in tumor stroma (Figure 2A,B). The tumor cell nuclei were characterized by vacuole with single large nucleolus, and nuclear membrane was generally smooth (Figure 2C,D). The background liver showed chronic inflammatory cells infiltration within the portal areas and mild fibrosis. Immunohistochemical staining revealed that the tumor cells were positive for CEA (Figure 3A), CK7 (Figure 3B), CK19 (Figure 3C); the Ki-67 index was about 30% (Figure 3D). No reactivity was observed in the surrounding hepatocytes. Most importantly, in situ hybridization for EBV in carcinoma cells was positive (Figure 3E). The tumor cells were also positive for villin (Figure 3F) immunohistochemically. 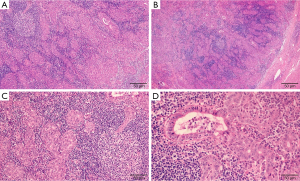 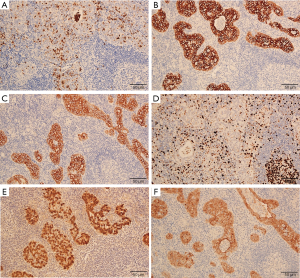 Due to the possibility of this might represent a metastasis from other sites, a comprehensive image study was recommended and performed, resulting in no additional lesion in the body. Additionally, due to history of abdominal pain, and histologically the tumor closely resembles EBV-positive gastric medullary carcinoma, an EGD was also performed, with abundant mucosal biopsies taken from the stomach. No dysplasia or carcinoma were identified. As a result, the diagnosis of primary hepatic LELC was rendered. The patient received no additional treatment. Follow up in one-year found no recurrence and the patient is well and functioning normally.

Histologically, LELC is a poorly differentiated carcinoma with abundant infiltrating lymphocytes. Hepatocytic LELC is a specific type of HCC. The World Health Organization (WHO) has recognized it as a variant of classical HCC (12) (LEL-HCC). LELC of the liver is uncommon and the diagnosis is mainly based on histologic features and a hepatocytic phenotype immunohistochemically. In contrast, LEL-CC expresses cholangio-differentiation. It is usually associated with EBV infection and has a marked female preponderance, and a favorable overall survival. Interestingly, this tumor distinctively contains frequent DNA hypermethylation (13). As a special form of cholangiocarcinoma, the tumor cells are often positive for CK7 and CK19 (biliary-types cytokeratin). In the current case, EBV infection was shown by positive in situ hybridization for EBER, and the morphology and immunohistochemical analyses included positive expression of CK7, CK19, and villin, indicating a biliary epithelial origin rather than a hepatocytic origin, suggesting that this tumor is LEL-CC.

Since LELCs from different organs are morphologically similar, and liver is a common target for metastasis, the possibility of metastatic carcinoma must be excluded before the tumor can be categorized as primary. Particularly, gastric EBV-associated medullary carcinoma, also a LELC, is morphologically and immunohistochemically indistinguishable from the tumor described in this report. This consideration prompted us to recommend an EGD to performed. Fortunately, biopsies did not reveal dysplasia or carcinoma, confirming the tumor in this patient to be a primary LEL-cholangiocarcinoma, EBV-related. This is significant for the patient due to the much better prognosis of a small, completely resected primary carcinoma without evidence of lymphovascular invasion, as opposed to a metastatic tumor.

The role of EBV infection in tumorigenesis of LELC is of particular interest both diagnostically and biologically. LELCs arising from the lung and stomach have strong associations with EBV, and the prognosis of EBV-associated GC depends on the host inflammatory response (14,15). In contrast, medullary carcinoma of the colon and LEL-HCC are rarely EBV positive. To our knowledge, only one case of LEL-HCC had been reported to be serologically positive for EBV (16), suggesting that EBV infection is not a risk factor for LEL-HCC. As gastric medullary carcinoma, LEL-CC is more commonly associated with EBV infection. Additional studies are needed to further our understanding of the role of EBV in the development of LEL-CC. Nonetheless, from a practical angle, based on data generated from studies of its gastric counterpart, EBV-associated LELC may be associated with better response to immune check point inhibitor therapy, partly due to its rich lymphocytic infiltration.

In summary, primary hepatic LELC is a distinct, rare variant of cholangiocarcinoma, which has characteristic histologic and immunohistochemical features. The clinical presentations of LEL-CC are nonspecific and most patients are asymptomatic. LEL-CC has strong association with EBV. Once the possibility of metastasis from other site is excluded, the diagnosis of primary LEL-CC can be made, which may carry a better prognosis than that of conventional cholangiocarcinoma. However, given the limited numbers of cases and short follow-up periods of this case, the long-term survival and clinical outcomes could not be adequately evaluated, further studies are needed to better understand the tumorigenesis, treatment, and prognosis of LEC-CC with EBV infection.

Conflicts of Interest: All authors have completed the ICMJE uniform disclosure form (available at http://dx.doi.org/10.21037/pcm.2020.03.03). The authors have no conflicts of interest to declare.

Ethical Statement: The authors are accountable for all aspects of the work in ensuring that questions related to the accuracy or integrity of any part of the work are appropriately investigated and resolved. All procedures performed in studies involving human participants were in accordance with the ethical standards of the institutional and national research committees and with the Helsinki Declaration (as revised in 2013). Written informed consent was obtained from the patient for publication of this manuscript and any accompanying images.