Thyroid cancer is a highly prevalent malignancy with a low overall mortality. As per the SEER database, in 2019, there are an estimated 52,070 new cases of thyroid cancer (14,260 in men and 37,810 in women) and about 2,170 deaths in the United States (1). While the overall cure rate is high with standard therapy, including surgery and radioiodine ablation, there are still patients who die of the disease when standard therapy fails or is not an option. Identifying treatments for these select patients is key.

The distinct histologic subtypes of thyroid cancer including papillary, follicular, medullary, and anaplastic carcinoma, have their own unique pathologic and clinical manifestations, and rates of disease related mortality. There are diverse genetic alterations within each subtype with varying clinical implications. Common alterations include RET/PTC rearrangements, BRAF point mutations, RAS mutations, and TP53 mutations (2). In papillary thyroid carcinoma (PTC), BRAF mutations, and specifically BRAF V600E mutation, are the most common alterations. BRAF V600E mutation is associated with aggressive clinicopathological features and increased disease related mortality. Non-V600 BRAF mutations are also seen, but have less clinically relevant data available. BRAF mutations may provide therapeutic targets for patients with more aggressive thyroid carcinoma. Understanding the mechanism of these mutations and the role of drugs that target the aberrant pathway leading to tumor cell proliferation, is essential to further decreasing thyroid cancer related mortality.

A 77-year-old male was initially diagnosed with thyroid carcinoma in November 2013, after MRI lumbar spine showed a 5 cm L4 expansile mass. A staging CT scan of the chest, abdomen, and pelvis at the time showed an enlarged right thyroid. Bone scan showed bilateral rib cage and left sternoclavicular joint activity. The patient was treated with radiation to the L3–L5 vertebral bodies in January 2014, followed by a thyroidectomy. Pathology from the surgery revealed a 3.6 cm poorly differentiated thyroid carcinoma with follicular and papillary features, high-grade regions, and lymph node metastasis. In March 2014, the patient had a repeat MRI which showed a persistent large expansile L4 mass. He was treated with 200 mci of radioactive iodide and thyroid suppression. In August 2014, a repeat PET scan showed mildly FDG avid lytic sternal and L4 lesions, for which the patient was started on denosumab. He then had multiple imaging studies consistent with metastases to the lung and progression in numerous bony sites. Lenvatinib, 24 mg daily, was started in June 2017 with multiple toxicities, including fatigue, weight loss, and diarrhea, requiring dose reduction to 14 mg daily by March of 2018.

In September 2018, PET-CT scan showed progression of pulmonary and bony metastases, as well as an increase in thyroglobulin from 195 to 434 over two months, suggesting resistance to lenvatinib. Given progression of disease on various lines of treatment, ctDNA via Foundation One was ordered for evaluation of actionable mutations. The ctDNA testing showed a BRAF K601E actionable mutation, as well as a CHEK2 splice site 592+1G > A and TP53 Q136H.

Given this finding and review of the literature, the decision was made to treat the patient with a BRAF inhibitor (dabrafenib) in combination with a mitogen extracellular kinase (MEK) inhibitor (trametinib). Repeat imaging showed an excellent response to treatment (Figure 1), but given adverse effects, including severe lower extremity edema, the medication was discontinued after approximately six weeks (with the last 3 weeks of treatment only consisting of single agent trametinib). Despite initial impressive response on imaging, the toxicity and subsequent rapid physical decline, associated with a rise in thyroglobulin and clear radiologic progression of disease (MRI spine with new large lumbosacral lesion), the patient was transitioned to hospice.

There are various forms of thyroid cancer, each with their own distinct pathologic, molecular, and clinical findings. The primary subtypes include papillary (most common and accounts for ~80% of cases), follicular (including Hurthle cell), medullary, and anaplastic. Several highly prevalent genetic alterations are uniquely seen in the various subtypes (Table 1) and include RET/PTC rearrangements, point mutations of BRAF, RAS mutations, and PAX8-peroxisome proliferator-activated receptor γ (PPARγ) fusion oncogene (3,4). These mutations seen are typically mutually exclusive of other major driver mutations (5). As such, BRAF mutations are more common in adults and are the major somatic genetic alterations driving the formation of PTC in the adult population (5). On the other hand, RET/PTC rearrangements tend to occur in children and are the major somatic genetic alterations that drive the formation of PTC in that population. It is important to understand the various molecular alterations, as they have therapeutic impacts.

BRAF mutations in thyroid cancer occur almost exclusively in PTC and PTC-derived anaplastic thyroid carcinoma (ATC). They can be subdivided into classical V600E mutations, other RAF non-V600 mutations, RAF fusions, and RAF deletions. Mutations in BRAF can cause hyperactivation of the BRAF protein, leading to increased activity in the MAP kinase pathway and subsequent tumorigenesis. As the MEK protein is located downstream in the MAP kinase pathway, it is also hyperactivated by these mutations (8) (Figure 2). 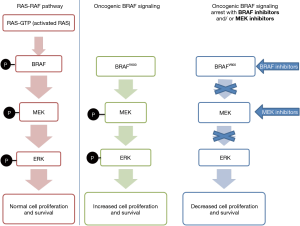 Amongst the BRAF mutations, BRAF V600E mutation is most common and accounts for more than 90% of these mutations (9,10). It is a point mutation, substituting thymine with adenine at position 1799 on exon 15, resulting in glutamine for a valine at residue 600. It is an early and common driver mutation in well-differentiated thyroid tumors, with subsequent late-event mutations that promote progressive dedifferentiation to ATC.

Non-V600 mutations (as in our case) can either increase or decrease kinase activity relative to wild type BRAF. Oncogenesis can occur via dysregulated kinase activity in a similar manner to V600E mutations, or via increased dimerization/transactivation of the partner protomer, CRAF, leading to hyperactivation. These mutations can lead to constitutive activation of BRAF and evade ERK-mediated feedback.

The role of BRAF inhibitors has been primarily studied in those with V600E mutations, with a large portion of the literature stemming from melanoma patients. First generation BRAF inhibitors include Vemurafenib and Dabrafenib. These agents only block the monomeric mutant BRAF (not dimers), and are associated with an increased risk of development of resistance, as well as pro-oncogenic adverse effects, including new skin cancers. The skin toxicities are due to paradoxical activation of MAP kinase pathway in epithelial cells that harbor the RAS mutation and bypass the inhibition of BRAF. Second-generation BRAF inhibitors, including sorafenib and LYS3009120 (a pan-RAF inhibitor) inhibit BRAF in active (dimer) formation, and thereby minimize the paradoxical pathway activation in Ras mutant cells. MEK inhibitors, including trametinib and selumetinib, block MEK kinase activity within the MAP kinase signaling pathway, and can decrease the risk of adverse events related to paradoxical ERK activation compared to monotherapy with BRAF inhibitors.

Data supporting treatment with BRAF inhibitors, alone, or in combination with MEK inhibitors, is primarily based on studies in those with V600 mutations. Patients with melanoma with BRAF V600E or V600K mutations were noted to have improved response rates and response duration when treated with combination therapy versus dabrafenib alone (11). A recent study in metastatic melanoma with V600E or V600K mutations looked at the 5 year outcomes of first line treatment with combination dabrafenib and trametinib and showed long-term benefit in approximately one third of the patients (12). A phase II trial of vemurafenib in patients with BRAFV600E positive metastatic or unresectable papillary thyroid cancer, refractory to radioactive iodine, showed a partial response in 38.5% of those never treated with a multi-kinase inhibitor targeting VEGFR (13), although a high rate of grade 3 and 4 adverse events were noted. More recently, a phase II, open-label trial looked at the efficacy and safety of dabrafenib and trametinib combination in BRAF V600E-mutated anaplastic thyroid cancer (14). There were 16 patients enrolled in the study and the overall response rate was 69% (95% CI: 41–89%). One patient had a complete response and 10 patients had a partial response. Seven subjects had ongoing responses at the time of the analysis. This led to the FDA approval of combination dabrafenib and trametinib in BRAF V600E mutated anaplastic thyroid cancer.

While BRAF V600E is the most widely identified BRAF alteration, our patient was noted to have a BRAF K601E mutation. This is a specific mutation at codon K601 in exon 15 of the BRAF genome which substitutes lysine (K) to a glutamic acid (E) at position 601 in BRAF, and leads to increased kinase activity. The mutation is in the activation segment of the kinase domain and is adjacent to V600. It occurs in about 5% of patients with melanoma, and is the third most common BRAF mutation (15,16).

Pre-clinical studies suggest that downstream signaling induced by the K601E mutant may be blocked by trametinib. In a study in melanoma, vemurafenib treatment of all of the BRAF mutant-expressing cells led to a decrease in phospho-MEK and ERK protein levels, whereas treatment with the MEK inhibitor led to a more dramatic decrease in phospho-ERK signaling, suggesting treatment response to both agents (15). In a phase II study of trametinib in patients with metastatic BRAF mutant cutaneous melanoma, one patient with a BRAF K601E mutation experienced a partial response (17). A case report of a patient with melanoma and a BRAF K601E mutation noted complete response to single agent trametinib over 36 months (18). Based on this case report and the data for treatment with combination BRAF inhibitor/MEK inhibitors in BRAF V600 mutated ATC, the consensus at our molecular tumor board was to treat our patient with the combination.

This case highlights the importance of testing for molecular targets in the treatment of thyroid cancer that has progressed on standard therapy. Currently, the approval for BRAF and MEK inhibitors in thyroid cancer is primarily limited to ATC. There is an active clinical trial investigating the use of dabrafenib with or without trametinib in patients with recurrent thyroid cancer (NCT01723202) with documented BRAF mutations. Additionally, the MATCH screening trial (NCT02465060) is assessing dabrafenib and trametinib in those with BRAF V600 mutations, and an arm has been completed with the use of single agent trametinib in BRAF non-V600 mutations, while a current active arm is investigating the single agent MEK inhibitor, ulixertinib for tumors with BRAF non-V600E/K mutations or BRAF fusions. The results of these studies and others will help elucidate the role of these medications in BRAF-mutated papillary thyroid cancer and other BRAF driven malignancies.

Conflicts of Interest: All authors have completed the ICMJE uniform disclosure form (available at http://dx.doi.org/10.21037/pcm.2019.09.04). The Series “Precision Oncology Tumor Board” was commissioned by the editorial office without any funding or sponsorship. BH serves the unpaid Guest Editor of the series and as an unpaid editorial board member of Precision Cancer Medicine from Apr 2019 to Mar 2021. The authors have no other conflicts of interest to declare.