Cancer diagnosis after solid organ transplantation: do we need to know the cell of origin?

We are witnessing unprecedented success in cellular and solid organ transplantation (SOT). With the increasing number of transplant cases and improved survival of transplant recipients, this population has seen an uptrend in malignancy incidence. Following cardiovascular and infectious causes, malignancy has become the third major cause of death after SOT (1). Cancer in patients with SOT poses a special challenge due to combination of donor and recipient factors as well as immunosuppression. Among SOT procedures, lung transplantation (LTx) is the 4th most often performed and has been transformed over the last two decades from a high-risk surgery with poor outcomes into a well-established and effective treatment of otherwise incurable lung disease with median overall survival exceeding 5 years after transplantation (2,3). Criteria for donor selection are not uniform among institutions and many transplantation programs permit donors with a long history of smoking in order to expand donor organ availability (4). With the increasing number of cases of SOT patients being diagnosed with a new malignancy, defining whether cancer originates from native or donor organ may be important for further delineation of donor selection criteria as well as patient counseling, informing other recipients, and possibly treatment selection.

A 70-year-old male with a 20-pack-year smoking history, who had been suffering from idiopathic pulmonary fibrosis for more than 5 years, received double lung transplant from a donor with unknown smoking history in the spring of 2018. He enjoyed dramatic improvement in his quality of life and shortly after LTx no longer had to use supplemental oxygen and was able to walk long distances. He closely followed-up with the pulmonary transplant team and had his surveillance computed tomography (CT) scan as well as bronchoscopy 6 months after LTx (Figure 1). Both tests were reassuring and showed no signs of rejection or findings suggestive of malignancy. He continued to do very well until December of the same year when he started complaining of dyspnea on exertion and left shoulder pain. Chest X-ray did not reveal any new interval changes and patient was empirically treated for atypical pneumonia. Due to lack of symptomatic improvement, 3 weeks later he underwent chest CT, which revealed a new left upper lobe mass. This triggered further testing with positron emission tomography (PET)-CT (Figure 1) and bronchoscopy, and patient was ultimately diagnosed with extensive-stage small cell carcinoma of the lung (Figure 2). Patient was treated with carboplatin and etoposide, with good symptomatic and radiological response (Figure 1). Although the anti-PD-L1 monoclonal antibody, atezolizumab, was approved around the time the patient was diagnosed with small cell lung cancer, a decision was made not to incorporate it into his treatment regimen due to the high rate of transplant rejection that had been reported in patients treated with immune checkpoint inhibitors (5). As of end of summer 2019, the patient continued to do very well with ongoing treatment effect. 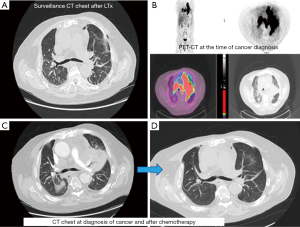 We sought to determine whether the patient’s small cell lung cancer originated from the donor lung or native airway epithelial cells, and results supported the former. This was accomplished using a panel of 12 markers recognizing highly-variable regions of human DNA using a PCR-based assay to compare DNA isolates from the diagnostic small cell carcinoma specimen to explanted lung tissue as well as to non-malignant donor lung tissue. The results of analysis demonstrated a complete match of those 12 markers detected for the small cell carcinoma with 12 markers for non-malignant donor tissue fragments. In contrast, only 1 of 12 markers matched between neoplastic tissue fragments and explanted recipient lung tissue. This was interpreted as donor derived malignancy—information that was relayed to all other centers where organ transplants from the same donor were performed.

It has been projected that with the increasing number of solid organ recipients, rapidly rising numbers of cancer cases will be observed in this population, with several reasons to expect this. Firstly, due to improvements of care in the post-transplant period, these patients fortunately have expanding life spans, with increasing cumulative risk for cancer. Secondly, native as well as donor organs are subject to the effects of immunosuppressive medications that are vital to prevent graft rejection but which can weaken natural antitumor response and promote potentially carcinogenic viral infections (6). Lastly, both donor and recipient may have had exposure to tobacco smoke and environmental toxins that are well-recognized carcinogens (7). With increasing numbers of patients on the waiting lists for life-saving surgery, many institutions have liberalized their donor selection criteria in order to overcome donor shortage. In a recently published single-institution report from the UK, as many as 47% of donors had a history of smoking. However, the authors claim that donor smoking history did actually not affect short- and mid-term outcomes after LTx (4). Contradicting this UK report are other retrospective studies where investigators considered not only short-term but also long-term outcomes and found that donor smoking may adversely affect recipient survival (8,9).

Learning whether a newly diagnosed cancer that manifested after transplantation had originated in the native or transplanted organ may help to minimize the risk of similar issues arising in the future amongst SOT patients by improving donor selection criteria. Even in cases of double LTx it should not be assumed that cancer originated from donor cells due to the possibility of epithelial cell chimerism that in some instances may persist years after LTx as well as residual tracheobronchial tissues post-surgery (10). When the time span between SOT and diagnosis of cancer is short and the testing establishes donor origin, it would be fair to conclude that malignancy had preexisted in donor and had been transmitted to the recipient. On the other hand, if the time interval between SOT and diagnosis is several years and molecular testing indicates donor origin, cancer has likely developed in situ due to prolonged immunosuppression in combination with donor and recipient risk factors (1).

There are several techniques available for such cases of investigative molecular pathology. In cases where the donor’s gender is known and mismatches the recipient’s, detection is easily done utilizing fluorescence in situ hybridization (FISH) for Y chromosome (11,12). Likewise, Y chromosome can be assayed by means of classical cytogenetics (13). In cases when the donor’s gender is identical, information about the cell of origin can be obtained by tumor cell human leukocyte antigen (HLA) haplotype analysis which pertains to comparison of various HLA isotypes on the surface of tumor cells with isotypes from donor and recipient cells (14). Finally, one may carry out a PCR-based or sequencing-based molecular genetic analysis on extracted DNA and look for differing allelic patterns between the tumor and intact recipient tissues (15). Currently available and applicable molecular fingerprinting tests are summarized in Table 1. In our case material was sent to Mayo Clinic Laboratories where a PCR-based assay for 12 markers recognizing highly-variable regions of human DNA was performed.

The above-described techniques can provide valuable information on the cell origin of cancer after SOT which may be used to provide guidance for future donor selection and minimization of cancer incidence after SOT. Patient counseling and reassurance might also be an important aspect, as many patients on the waiting lists for SOT are young people with no predisposition to malignancy, who would be devastated to learn that they developed cancer after SOT and would likely want to know its origin. In several cases where transmission of cancer from the donor has been proven, it has caused criticism in the media and even legal action (16-18). On the other hand, if patients learn that cancer arose in the native organ and was possibly related to their habits, such as smoking, they might reconsider their lifestyle in order to improve their outcomes. In a systematic review of renal cancer in recipients of kidney transplant, malignancy of recipient and donor origin had comparable incidence (19). This review describes cases where malignant cells were determined to be derived from both donor and recipient, possibly due to persistent microchimerism. In the instances where cancer arose from the donor, recipients of other solid organs from the same donor may benefit from closer monitoring and potentially earlier diagnosis of cancer, as well as being counseled on its possibility (20). Defining cell of origin may also play an important role in modification of immunosuppression. Current practice is consistent with some reduction of immunosuppression to allow immune restoration in order to combat malignant cells (21). However, in several cases of donor-derived cancer, complete remission of cancer has been achieved by discontinuation of immunosuppression followed by transplantectomy of rejected graft (20,22). Obviously, conventional chemotherapy carries a higher risk of infectious complications in patients with SOT due to concurrent use of immunosuppression, but it is unlikely that the cell of cancer origin would influence dosing or schedule of chemotherapy. In contrast, immunotherapy carries substantial risk for graft rejection in patients with SOT and should generally be avoided in cases where transplant rejection could significantly impact outcomes (5).

Conflicts of Interest: All authors have completed the ICMJE uniform disclosure form (available at http://dx.doi.org/10.21037/pcm.2019.09.06). The Series “Precision Oncology Tumor Board” was commissioned by the editorial office without any funding or sponsorship. BH serves the unpaid Guest Editor of the series and as an unpaid editorial board member of Precision Cancer Medicine from Apr 2019 to Mar 2021. The authors have no other conflicts of interest to declare.