Robotic surgery was first idealised from a National Aeronautics and Space Administration (NASA) project aimed at ensuring surgical support to astronauts in space thanks to the telepresence. Hence, in the 1990s, the first robotic prototype based on telesurgery was designed, representing the preliminary platform for the future systems.

A few years later the situation was turner around by the commercialisation of the AESOP (Computer Motion, Inc., Goleta, CA, USA), the first robotic platforms for civilian use approved by the Food and Drug Administration (FDA). This system was later replaced by ZEUS, initially planned for cardiac surgery, and in the same period the DaVinci system (Intuitive Surgical, Sunnyvale, CA, USA) was brought to the market. At present, after the merger between Computer Motion and Intuitive Surgical, only the DaVinci robotic platform is available in the clinical practice, with two different versions, the Si system and the latest Xi system (1,2).

Since its first application in thoracic surgery about 20 years ago, robotic surgery has undergone a substantial process of technological evolution, with the corresponding stepwise modification of surgical technique and application (3).

The current robotic surgical system consists of a master console and a patient cart, connected via electrical cables and optic fibres with a high-resolution three-dimensional (3D) camera and three multi-jointed robotic arms.

The first generation of DaVinci, the Standard System, consisting of the only 3-arm platform (Figure 1). For this reason, using the DaVinci Standard, the surgical technique was almost like video-assisted thoracoscopic surgery (VATS) approach: 3-arm approach plus a further centimetric incision for the assistant to insert conventional thoracoscopic instrument. The patient was positioned in lateral decubitus, resembling the posterolateral thoracotomy positioning. In our experience, the first port (camera) was set at the 7th–8th space along the mid-axillary line, the second (left arm) at the 6th–7th intercostal space in the post-axillary line, the “service entrance” (right arm) at the 4th–5th intercostal space in the anterior axillary line and the assistant port was between the “service entrance” and camera port (4).

In 2003, with the introduction of the fourth robotic arm in the DaVinci platform, the port-mapping for lung resection was modified to adapt it to the 4-arm approach.

According to our experience. during the operation, CO2 was inflated (5–8 mmHg) to ensure an increase of operative space and better vision during dissection manoeuvres.

With the third generation of DaVinci, the Si system, it was introduced several sizeable technological innovations such as enhanced high definition (HD) vision with more advanced instrumentations, Firefly, dual console and simulator.

Furthermore, thanks to the robotic simulator and dual console, available since 2009, the training of the surgeons starting a robotic program has become methodical and more effective (8). Training with the simulator represent the first step in a robotic training program, an essential step to obtain and improve the skills required to approach the operation having gained some confidence with some of the essential features of the robotic system, as camera motions and instrument manipulation. An efficient simulation program makes the console-surgeon actions more instinctive and fluent hence reducing the possible surgical mistakes (9).

As a result, the dual console, introduced with the third generation of the robotic system, represents a decisive device for the educational surgical path, permitting in a first phase to observe the procedure from the second console, with the same field of view of the first operator. In a second phase, the trainer can perform the surgical operation with the active support of the expert surgeon, which can take control of the masters of the other console whenever required. The use of the dual console allows the optimization of the first phase of the robotic surgical experience, ensuring a safe situation to the patient and optimization of operative results (10).

Further innovations have been introduced in the latest robotic system (Xi), resulting in a faster docking time process, increased maneuverability of the arms and consequent fewer traumatism (Figure 2). 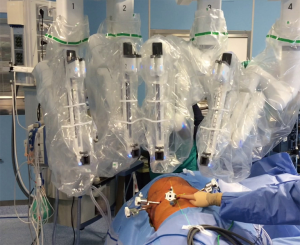 The highly advanced technological features of the robotic system are able to ensure great precision during the procedure, in a minimally invasive way, despite the lack of tactile feedback. Training of entire staff to obtain the essential skills for the robotic technique is a crucial point for maximizing surgical results, reducing complications and approaching progressively more challenging cases (11).

The age of robotic thoracic surgery

At the beginning of its application for thoracic surgery procedures, robotic surgery was considered an option only for selected early stage patients (12).

After the initial phase, with the proof of feasibility and safety of the approach, robotic surgery has been proposed also to more advanced stages cancer, obtaining positive post-operative and oncologic results. Indeed, when compared with open approach and VATS, robotic surgery is associated with reductions in length of stay, overall complication rates and mortality (13). Moreover, robotic approach appears related to a higher rate of nodal upstaging, considered the surrogate of oncologic radicalness (14).

Considering the lower hospitalization and rate of complications, reported by several articles in the last decade, robotic surgery is now considered an advisable option also for high risk-patients.

In fact, studies on the evaluation of a group of higher peri-operative risk patients have shown the advantages in the outcomes when treated with robotic surgery. According to Kneuertz et al., robotic lung resection can decrease the incidence of pulmonary complications, therefore patients with limited pulmonary function can benefit from the robotic approach (15). Satisfying results were described also for older and obese patients (16,17).

Undoubtedly, a solid surgical background, high surgical volume and an expert team in the robotic operative room are mandatory to achieve effective results, to approach challenging cases and to manage the possible intra-operative complications.

One of its latest recent innovation is represented by DaVinci Single Port (SP1098), consisting in a platform with a 25-mm single port, by which three 6-mm articulated instruments and an 8-mm 3D camera are inserted. SP surgical system is currently approved by the FDA only for urological and trans-oral otolaryngology procedures (19,20). SP system represents one of the manifold innovations introduced by Intuitive Surgical system over the years, producing improvements in technical application and incremental diffusion in routine surgical activity.

The diffusion of robotic surgery has encouraged the development of other robotic devices in the meantime.

Different robotic systems are in the development phase and the more advanced seems to go beyond the greatest lack of DaVinci, represented by no haptic feedback. The most promising system, born from a collaboration between Ethicon Endo-Surgery (Johnson & Johnson) and Verily (formerly Google Life Sciences), is Verb Surgical. Its goal is to create a new way to do surgery, the “4.0 Surgery”, to apply in a hybrid operative room. Thanks to the integration of advanced instrumentation, enhanced visualization, connectivity and data analytics, this new system will be able to support surgeon in planning of operation and in taking decisions, working in safest way.

After an initial phase, necessary to establish its safety and feasibility, robotic surgery has affirmed its application into the thoracic field, in a wide range of operations, for pulmonary and mediastinal disease. Thanks to positive post-operative outcomes, the application of robotic surgery has been progressively enlarged, also to high-risk patients and complex cases. Despite its high costs, requiring accurate economic planning, the robotic approach actually represents the instrument to obtain precision in surgery, in the present and in the future, with its predictable evolution.

The authors thank Teresa Hung Key for the proofreading.

Provenance and Peer Review: This article was commissioned by the Guest Editor Marcelo F. Jimenez for the series “Precision Surgery for Lung Cancer” published in Precision Cancer Medicine. The article has undergone external peer review.

Conflicts of Interest: The series “Precision Surgery for Lung Cancer” was commissioned by the editorial office without any funding or sponsorship. FM is an official proctor for Intuitive Surgical. The authors have no other conflicts of interest to declare.