Video-assisted thoracic surgery (VATS) for lung cancer was introduced in 1991 (1). Since then VATS lobectomy has become an accepted procedure and emerged as gold standard for treatment of lung cancer worldwide. VATS offers several advantages, including low morbidity, shorter hospitalization, decreased pain, better outcome and better tolerance for adjuvant chemotherapy (2,3). To avoid and overcome substantial complications, thoracic surgeons must develop competence and master VATS to a precision level, where the physicians are permitted to perform procedures independently. They must have extensive knowledge and skills to operate on patients. Developing competence and then proficiency in VATS lobectomy, not only requires enough procedures to achieve consistent safety and efficacy, but also requires qualitative upsurge in knowledge, new skills and performance. The novice surgeons should be mentored and supervised appropriately until they demonstrate skills required for competency and then proficiency in VATS procedures.

There are different opinions about the caseload, time and other program requirements to achieve competence and proficiency in VATS. Some suggest that trainees must perform more than 100 minor procedures to get familiar with the surgical instruments and basic VATS skills before undertaking a VATS lobectomy (4,5). Furthermore, 25 lobectomies per year are suggested to complete learning curves and retain proficiency (4,5). Would a threshold of 25 or 50 VATS lobectomies ensure that a surgeon is competent? Should a VATS surgeon have thoracotomy experience?

The aim of the current review was to get a narrative overview of the different VATS programs, learning curves, VATS assessment tools, role of simulation in VATS and to explore the existing evidence of training models and their efficacy.

An electronic search was performed in PubMed. Articles published before April 2019 were screened and included if considered relevant. To achieve maximum sensitivity of search strategy and identify all trials, we used the following the terms: training VATS lobectomy, learning curve VATS lobectomy, VATS certification, VATS non-technical skills and VATS simulation. All the studies including VATS lobectomies and VATS learning curves published in English were included. The references of all retrieved articles were reviewed for further identification of any relevant studies. We excluded studies that we did not find directly relevant for this study (Figure 1). 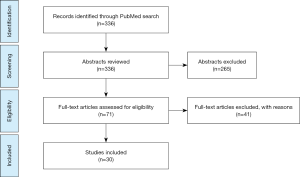 Procedural expertise exhibited by a VATS surgeon is difficult to designate and classify. To qualify and practice VATS independently, it is required that physicians demonstrate competence and have the ability to perform a procedure safely and effectively. To develop competency and efficiency in VATS there is a need for structured education programs. There are many different methods to learn VATS. Surgeons can observe other surgeons, read books, see videos, read anatomical atlases, attend national and international thoracic surgery courses and seminars, perform simulation training etc.

Several factors influence learning curves, such as the potential number of surgeries, size of center and time between surgeries, preparation before surgery and patient selection. There is a difference in learning curve between a self-taught surgeon and a surgeon under supervision of experienced VATS surgeons. Konge et al. described that the learning curve can be overcome, even with limited prior experience in thoracotomy, with thorough preparation of trainees and training on selected patients under close supervision (6). A trainee who had performed 14 lobectomies by thoracotomy was enrolled in a training program. The preparatory phase included VATS master classes with hands on practice on live pigs and a VATS lobectomy course with a validated lobectomy model and observation of VATS lobectomies both on video and in the operating theatre. The trainee practiced on a simulator, on pigs and performed more than 100 minor VATS procedures and observed more than 100 VATS lobectomies. The preparatory phase was followed by clinical practice, where suitable patients were selected, in regard to factors such as tumor localization, tumor size and absence of major comorbidities. The trainee performed 29 VATS lobectomies in a 12 months’ time under supervision of an experienced VATS surgeon. None of the operations were converted to open thoracotomy and per-operative and post-operative results were acceptable.

The role of simulation in VATS surgery

A wide range of simulations are developed to increase patient safety by improving novice surgeons’ cognitive and procedural skills in VATS before they can operate on patients. 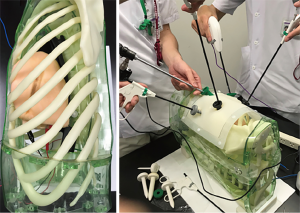 Figure 2 Dry lab. The Biotexture lung is installed inside the Biotexture thoracic cavity simulator to offer a realistic environment for surgical training. Shimada (9).

Virtual reality simulators on the other hand create a realistic setting, where trainees can develop their basic skills such as; hand-eye coordination, depth perception, movement of instruments in a repetitive manner and out of theatre environment where the trainees can achieve surgical competence before operating on patients. Simulators accelerate the learning curve (13).

Different types of virtual reality simulators such as Lap Mentor™ (3D Systems, California, US) or LapSim™ (Surgical Science, Gothenburg, Sweden) are available (Figure 3). The validity of simulation-based assessment and the effect of simulation-based training are evaluated and investigated by Jensen et al. and Bjurström et al. (13-15).

Figure 3 VR simulation LapSim®module of a right upper lobe lobectomy demonstrating the dissection of the upper lobe vein (A), slinging (B) and stapling (C).

The assessment of competency

The assessment of competence in VATS is discussed in several studies. Konge et al. created an assessment tool consisting of 10 items by an expert group of physicians (16). Fifty consecutive thoracoscopic wedge resections were included and assessed blindly by two experts. They concluded that this tool for assessing performance in thoracoscopy was reliable and valid and can offer structured feedback to trainees and be used to evaluate new teaching curricula. Jensen et al. used a Delphi method and developed a novel assessment tool for VATS lobectomy based on a large number of internationally recognized VATS expert’s consensus (17). The VATSAT (video-assisted thoracoscopic surgery assessment tool) consists of eight items. These items can support learning VATS lobectomy by providing structured feedback and help the supervisors identify when the trainees have acquired competencies for independent performance. The validity evidence for VATSAT was provided by Petersen et al. in a Danish nationwide study (18). They recorded 60 lobectomies performed by 18 thoracic surgeons of different level of experience; expert, intermediate and beginners. The videos were rated using VATSAT and solid evidence of validity was provided. They concluded that VATSAT could be an important aid in future training and certification of thoracic surgeons. The theoretical knowledge acquisition for VATS lobectomy shows that cognitive skills gained through theoretical testing support technical performances (19). It can also stimulate learning and encourage self-study. Savran et al. developed and gathered validity evidence for a theoretical test on VATS lobectomy consisting of multiple-choice questions (20). Technical skills in VATS surgery are dependent on cognitive social and personal resource skills that contribute to safe and efficient task performance and can be defined as Non-technical skills. VATS surgeons are dependent on their team. Team training with a shared mental model of the operation is an important issue. Gjeraa et al. identified non-technical skills for VATS lobectomy (21).

Which programs are available and should be offered?

Efficacy of different training programs are compared in several studies but there is no consensus about which training modality is superior to other.

Ferguson et al. concluded that VATS lobectomy can be safely taught to trainee surgeons with no increase in intraoperative blood loss, morbidity, mortality or postoperative stay, but increase in operating time (25). They observed an increase in experience during the development and establishment of a VATS lobectomy program and they recommend that training programs should be coordinated at a national level to aggregate experience. Wan et al. demonstrated that VATS lobectomy can be taught to trainees supervised by experienced surgeons (26). In a prospective study they compared the results of VATS lung resection between experienced thoracic surgeon and surgical trainees under supervision. One hundred eleven patients with clinical stage I and II lung cancer underwent different lung resections in four years. Fifty-one of the procedures were performed by experienced consultant and 60 by trainees under supervision. One patient in the consultant group and 3 in the trainees’ group were converted to open surgery due to bleeding from the pulmonary artery. The trainees spent more time in the operating room compared to experienced VATS surgeons, but there were no significant differences in intraoperative or post-operative complications and outcomes.

Reed et al. concluded that stepwise plan for introduction of a VATS lobectomy training program would facilitate safe learning of the technique (27). They performed 202 lobectomies in a four years period, in which 97 procedures were performed by thoracotomy and 105 were performed thoracoscopic. The number of thoracoscopic procedure increased from 18% in the first quartile to 82% in fourth quartile. This shows that VATS can be achieved safely if a stepwise transition is evoked. Sandri et al. described VATS lobectomy program from a trainee perspective (28). They identified three distinct issues; I. Stepwise approach to VATS lobectomy and standardization of teaching; starting with holding camera and under supervision making the ports to pulmonary ligament dissection and hilum exposure. Then advancing once experience is gained, and the trainee is sufficiently confident the next step will include vessels and bronchus dissection, gradually lobectomy and lastly lymphadenectomy. II. Off-theatre independent training; such as reviewing videos, black boxes and virtual reality simulations. III. Evaluation and certification; they suggest that as an end point to any educational program; assessment of competence and certification should be taken under consideration. Does the previous surgical experience effect the learning curve?

We have reviewed the recent literature on VATS lobectomy. Several studies show that there is a need for a structured training program to achieve precision. We are moving from an apprenticeship model based on a fixed time or a certain number of procedures to competency-based learning including simulation-based training. We suggest that all thoracic trainees should pass four phases consisting of theory, simulation, supervised clinical training, and independent clinical practice. Each phase should be completed with certification. (I) Theoretical phase; Reading books, articles, attending conferences, and completing multiple choice questions. (II) Off theatre preparatory phase; Starting with virtual reality simulation to learn the basic skills followed by dry and wet lab to get familiar with the real instruments and the feeling of real tissue. (III) In theatre preparatory phase; Stepwise learning, where the trainee starts with placing ports, performing minor VATS procedures; such as wedge resections, pleura biopsies etc. Once sufficient experience is gained and the trainee performance is consistent, VATS lobectomy procedures can be performed under supervision of a VATS expert until the trainee demonstrates skills and outcomes required for competency and then proficiency. (IV) Independent practice; we suggest that every end point of any educational program, evaluation, assessment of competence, should be completed with certification. It is important to continuously monitor per-operative and post-operative results and video records of each performance can be considered for evaluation.

Provenance and Peer Review: This article was commissioned by the Guest Editor Marcelo F. Jimenez for the series “Precision Surgery for Lung Cancer” published in Precision Cancer Medicine. The article has undergone external peer review.

Conflicts of Interest: All authors have completed the ICMJE uniform disclosure form (available at http://dx.doi.org/10.21037/pcm.2019.05.02). The series “Precision Surgery for Lung Cancer” was commissioned by the editorial office without any funding or sponsorship. RHP reports speaker fee from Medtronic. The authors have no other conflicts of interest to declare.