Increasing tumor-specific immune responses with immunostimulatory monoclonal antibodies (mAbs) is a promising strategy in cancer therapy. Antagonistic mAbs blocking signaling through inhibitory receptors such as cytotoxic T-lymphocyte-associated antigen 4 (CTLA-4) and programmed cell death-1 (PD-1) have been shown to induce sustained anti-tumor responses in many cancers across various histologies, and agonistic mAbs targeting activator receptors are undergoing clinical trials (1). Costimulatory receptors of the tumor necrosis factor (TNF) receptor superfamily (TNFRSF), such as 4-1BB (CD137, TNFRSF9) are particularly interesting targets, as these receptors are absent on resting naïve T cells, but transiently expressed after TCR engagement in a precise and narrow time window (2). In addition, 4-1BB is also expressed on B cells, dendritic cells, NK cells, granulocytes and endothelial cells at sites of inflammation. 4-1BB has only one confirmed ligand [4-1BB-Ligand (4-1BBL), TNFSF9], which is expressed on antigen presenting cells (2). Crosslinking of 4-1BB by its ligand or an agonistic mAb enhances T cell proliferation, cytokine production, survival and cytolytic activity.

Melero et al. (3) were the first to report that agonistic anti-4-1BB mAbs induce regression of large established tumors in mice. The long-lasting and tumor-specific immunity was primarily mediated by CD8+ T cells (3). Two mAbs to human 4-1BB have been developed and are undergoing clinical evaluation. Urelumab (BMS-663513) is an agonistic, non-ligand–blocking, fully human IgG4 mAb with a hinge region mutation to improve stability. A clinical trial of urelumab as a single agent was associated with serious liver toxicities that resulted in two fatalities, leading to its interruption. The appearance and severity of transaminase elevations were dose-dependent with increased incidence at doses ≥1 mg/kg. Utomilumab (PF-05082566) is an agonistic, ligand-blocking, fully human IgG2 mAb with a better safety profile than urelumab, but with only modest antitumor activity.

In the November 2018 issue of Immunity, Buchan et al. (4) set out to delineate the mechanisms through which full-length IgG-based anti-41BB mAbs promote antitumor immunity, and how the specific mechanisms depend on the variable and/or the constant regions of the antibody. The paper begins with the generation and characterization of chimeric mAbs (XI) with variable regions of the rat IgG2a anti-4-1BB LOB12.0 mAb, and either a mouse IgG1 (mIgG1) or IgG2a (mIgG2a) constant region (r4-1BBXImIgG1 and r4-1BBXImIgG2a, respectively). After verifying that both chimeric mAbs had the expected binding activities—both mIgG1- and IgG2a-based chimeras bound 4-1BB similarly, while r4-1BBXImIgG1 interacted preferentially with inhibitory FcγRs and r4-1BBXImIgG2a with activating FcγRs—they studied their effects in three solid tumor models. The r4-1BBXImIgG2a induces effective antitumor immunity in all the tumor models while the IgG1-based chimeric mAb had minimal effect. Next, they attempted to understand the mechanistic differences between the two chimeric anti-4-1BB mAbs that might explain their differential efficacy. They found that intratumoral regulatory T (Treg) cells were effectively reduced in tumor-bearing mice by r4-1BBXImIgG2a, but not r4-1BBXImIgG1. Using bone marrow-derived macrophages from wild-type mice they demonstrated that the IgG2a-based chimeric anti-4-1BB mAb induced phagocytosis of 4-1BB-expressing T cells, while IgG1-based chimeric mAb did not, and the 4-1BB expression levels directly correlated with the efficiency of target cell depletion. Importantly, in tumor-bearing mice with a conditional deletion of 4-1BB on Foxp3+ Treg cells, the r4-1BBXImIgG2a lost its Treg cell-depleting activity and long-term protective immunity. Collectively, these studies demonstrated that the r4-1BBXImIgG2a-specific Treg cell depletion depended on the simultaneous binding to both 4-1BB on Treg cells and an FcγR in tumor-infiltrating myeloid cells (Figure 1). 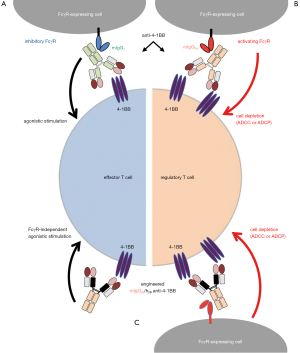 Finally, the authors generated an engineered anti-4-1BB antibody to simultaneously deplete Treg cells and stimulate effector CD8+ T cells by swapping the CH1 and hinge regions from human IgG2 in the mIgG2a constant region, a modification known to confer FcγR-independent agonistic properties on costimulatory mAbs (Figure 1). The engineered hybrid mIgG2a/h2B anti-4-1BB antibody was more effective in vitro than the r4-1BBXImIgG2a mAb, while retaining its phagocytosis-inducing properties. Finally, they demonstrated that the engineered hybrid mIgG2a/h2B anti-4-1BB antibody was superior to the IgG2a-based anti-4-1BB mAb, in inhibiting the growth of EG7 thymomas in mice.

Although clinical trials will be required to test these ideas in humans, the work of Buchan et al. (4) provides several insights that not only inform the development of next-generation anti-4-1BB antibodies, but also show us how to combine depleting and agonistic full-length IgG-based therapies in general. These findings delineate a very intricate scenario, in which, in addition to the tumor immunogenicity and the numbers and locations of CD8+ tumor-infiltrating lymphocytes, the abundance of Treg cells and FcγR -expressing cells in the tumor microenvironment, as well as the ratio of activating to inhibitory FcγR, are important considerations that must be carefully studied in each patient. Furthermore, the competition between therapeutic mAbs, and probably endogenous IgG, can alter the mechanism of action and impact treatment efficacy of full-length IgG-based anti-41BB mAbs. In addition, the dynamic and changing nature of tumors, in the same patient throughout their evolution, or in different tissue locations (primary tumor vs. metastatic deposits), introduces additional complexity to the development of immunostimulatory strategies triggering activating receptors, which would probably have to be personalized, on an individual, temporal and even spatial level.

Another important question is whether it will be better to combine these dual properties in one antibody, as shown here in a mouse model, or to use Fc-optimized antibodies sequentially. These results allow speculating that costimulatory strategies that are not based on full-length IgG-based antibodies having wild type Fc regions (5,6), could be more easily systematized and applied in clinical setting. Finally, and considering that toxicity has been the major impediment for first-generation anti-4-1BB mAbs, and that several studies suggest that organ toxicities are mainly dependent on FcγR interactions (6), a similar study would be needed to determine the impact of the IgG isotype on immunological abnormalities associated with full-length anti-4-1BB antibodies.

Funding: L Alvarez-Vallina is supported by grants from the Danish Council for Independent Research - Medical Sciences (DFF-6110-00533), the Spanish Ministry of Economy and Competitiveness (SAF-2017-89437-P) and the CRIS Cancer Foundation.

Provenance and Peer Review: This article was commissioned by the editorial office, Precision Cancer Medicine. The article did not undergo external peer review.

Conflicts of Interest: The author has completed the ICMJE uniform disclosure form (available at http://dx.doi.org/10.21037/pcm.2019.01.01). LAV is co-founder of Leadartis. The author has no other conflicts of interest to declare.

Ethical Statement: The author is accountable for all aspects of the work in ensuring that questions related to the accuracy or integrity of any part of the work are appropriately investigated and resolved.