The emergence of new drugs for the treatment of non-small cell lung cancer (NSCLC) patients has led to the development of newer adverse events (AE), including ophthalmic related AE.

Epidermal growth factor receptor (EGFR) is strongly expressed in both the skin and the ocular tissues, including basal epithelial cells of lumbal, conjunctival and corneal epithelia (10). However, its expression is low in the superficial conjunctival epithelium. EGF, the natural ligand for EGFR is produced by tears and controls the normal ocular homeostasis. This specific pattern of EGFR expression in the ocular tissues correlates with specific ocular toxicity for drugs targeting EGFR in NSCLC patients. Usually, the ocular AE associated to EGFR inhibitors appear in the context of other cutaneous toxicity (11,12). Erlotinib has been associated to keratoconjunctivitis sicca and corneal ulceration and perforation, in some cases related to excessive eyelashes growth (13). Gefitinib ocular AE are common and include conjunctivitis, blepharitis and eye dryness (14). Less frequent is the corneal erosion associated to trichomegaly in patients receiving gefitinib. Afatinib has also been associated with conjunctivitis and dry eye (15,16).

Furthermore, agents targeting PD-1/PDL-1 also can associate ocular toxicity, but this is a rare event. Uveitis has been reported in patients receiving antiPD-1/PD-L1 monoclonal antibodies (17).

Ophthalmic complications related to systemic treatments are infrequent, and usually mild and transient, but can be concerning. Ocular toxicities are underestimated and consider less important when compared with another potential life-threatening AE. However, both oncologist and ophthalmologist should be aware of these potential AE that can impact directly the quality of life of patients with NSCLC.

Here, we report the case of a patient who develop a bilateral white cataract related to rociletinib, a third-generation EGFR inhibitor targeting both sensitizing and T790M EGFR mutations.

We present the clinical case of a 52-year-old and never smoker male, native of Morocco. He had no prior relevant medical history except for chronic pterygium since 2012 that did not required surgery. In January 2015, he consulted after having noticed an enlarged cervical lymph node associated to a history of dry cough for the prior two months. A CAT scan revealed a left hilar mass, mediastinal lymph node involvement and pleural effusion. Both the pleural effusion cytology and the cervical node biopsy revealed an adenocarcinoma (TTF1+). The work up studies also demonstrated bonny lesions. Thus, the final staging was consistent with a stage IV adenocarcinoma of the lung (cT3N2M1). Molecular testing revealed the presence of an EGFR mutation (L858R).

In February 2015, the patient was started on erlotinib at 150 mg q.d. achieving a partial response (PR) as best response. As erlotinib related AE, the patient presented a grade 3 rash that was correctly managed with topical steroids and oral antibiotics. In October 2015, the patient experienced a disease progression (DP) with a significant and symptomatic enlargement of the primary tumor.

Through a new lung biopsy, the T790M resistant mutation was detected. In November 2015, he switched treatment to rociletinib in the TIGER2 clinical trial, being assigned to receive 500 mg b.i.d. As AE related to rociletinib, the patient developed a grade 3 hyperglycemia that required hypoglycemic therapy (both insulin and metformin) and dose reduction of rociletinib to 375 mg b.i.d. The patient experienced a PR as best response. In August 2016, the patient consulted on the ER due to an episode of dysarthria. A CNS CT Scan revealed multiples lesions consistent with metastases. Since the lung and bonny disease were controlled patient was allowed to continue on rociletinib after the completion of 30 Gy of whole cranial radiotherapy. The following work up study revealed pulmonary and bonny DP. After eleven months on therapy, rociletinib was stopped and the patient was proposed to start a third line chemotherapy with carboplatin plus pemetrexed followed by maintenance pemetrexed depending on response.

After 3 weeks off rociletinib the patient complained of a bilateral visual loss. He was referred to the ophthalmologist under suspicion of cataract related to rociletinib. The ophthalmologic examination revealed a bilateral visual acuity of hand motion secondary to a quickly progressive bilateral white cataract (Figure 1). The intraocular pressure (IOP) was 16/16 mmHg and the B-mode ultrasonography revealed no retinal detachment. In December 2016, the patient underwent a phacoemulsification and intraocular lens implantation in the right eye (Figure 2). In January 2016 the cataract of his left eye was also removed. Although the surgery of a hypermature cataract is often a complex procedure, there was no complication. Three months after surgery the patient presented a visual acuity of 20/20 in both eyes. 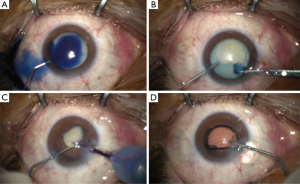 The use of new drugs to treat patients with advanced NSCLC has led to an improvement in survival. However, AE should be carefully considered to avoid hampering patient’s quality of life. In fact, ocular toxicities are graded according to the Common Terminology Criteria for Adverse Events that considers the degree of interference with the basic functioning and ranges from 1 (asymptomatic) to 4 (blindness).

Ocular adverse events represent a small proportion of AE, and the majority of them are reversal if diagnosed timely. Consequently, both the awareness of these possible ocular toxicities and their early recognition by the oncologists are of extreme importance for an early referral to the ophthalmologist, an accurate evaluation and early intervention.

Rociletinib is a third generation TKI that was tested in patients with EGFR whose disease had progressed to first and second generation EGFR-TKI demonstrating promising results in a phase I trial in patients who developed resistance due to the emergence of a T790M resistant mutation (18). Several uncommon AE were related to rociletinib such as hyperglycemia and QTc prolongation in the EKG. Unfortunately, the benefits of this drug were unconfirmed subsequently and the clinical development of this drug was halted.

Recently, an increased risk for cataract occurrence has been reported in patients treated with rociletinib (19-21). These typically appeared in patients with longer exposure to rociletinib (the median time since rociletinib initiation to cataract surgery was 15 months). Cataracts related to rociletinib occurred more frequently in younger patients and with a rapid onset when compared to typical senile cataracts. The 65% of the patients who developed cataracts were off treatment once the ocular symptoms started. The 43% of the patients required surgery that successfully restored their visual acuity. Male gender and the duration of rociletinib exposure were the risk factors associated to rociletinib related cataract. No association between age, hyperglycemia, glycated hemoglobin or dose of rociletinib and cataract development was found. As previously described, our patient started with ocular symptoms eleven months after rociletinib initiation and once he was off treatment. An early referral and ophthalmologic examination once the first symptom of decline of vision appeared was the key to operate him and restore his vision.

By presenting this case, we intent to promote the awareness of a multidisciplinary approach to recognize and treat specific clinical situations related to treatments. There is no current consensus or recommendations about routine ophthalmologic monitoring and management of ocular toxicity. However, an initial ophthalmologic examination could be proposed before therapy initiation.

We thank the patient who granted permission for the present case report publication.

Conflicts of Interest: All authors have completed the ICMJE uniform disclosure form (available at http://dx.doi.org/10.21037/pcm.2018.06.01). The authors have no conflicts of interest to declare.

Ethical Statement: The authors are accountable for all aspects of the work in ensuring that questions related to the accuracy or integrity of any part of the work are appropriately investigated and resolved. All procedures performed in studies involving human participants were in accordance with the ethical standards of the institutional and national research committees and with the Helsinki Declaration (as revised in 2013). Written informed consent was obtained from the patient for publication of this manuscript and any accompanying images.