This series on “ALK and ROS-1 NSCLC patients treatment approach based on genomic profile by liquid biopsy” is edited by Dr. Jesús Corral, Dr. Laura Mezquita, and Dr. Ernest Nadal.

Dr. Corral graduated with Master Degree from Seville Medical School in 2003. He obtained his Medical Oncology degree at the University Hospital Virgen del Rocío, Seville (Spain) with an observership at M.D. Anderson Cancer Center, Houston (USA). He completed his career with a fellowship at Drug Development Unit from the Royal Marsden Hospital in London (UK) and a Master in Biomedical Research and Clinical Trials.

He is author of more than 45 high impact factor journal papers, 14 books and 70 national/international meeting abstracts, focused on thoracic malignancies diagnosis and treatment.

Dr. Laura Mezquita is a Spanish medical oncologist, working in Thoracic Oncology. She finished her training in medical oncology in Salamanca in 2011, and then moved to Madrid where she worked for 4 years. Between 2015 and 2020 She has been working in Gustave Roussy (France) with Prof. Benjamin Besse as her mentor, initially as Translational Research Fellow in Lung Cancer ImmunoOncology (2015-2016), followed by a 2 years period of Clinical Fellow in the Thoracic Oncology Group (2016-2018). In November 2018, she joined the Precision Medicine Group. In 2018, She completed her PhD project about the impact of Radon gas in lung cancer. From February 2020, she has been working in the Thoracic Unit, at Hospital Clinic (Barcelona, Spain), and she has also joined the Translational Genomics and Targeted Therapeutics Group (IDIBAPS, Barcelona), as PostDoctoral Researcher. She is involved in several clinical and translational research projects focus on three main areas: a) biomarkers for immunotherapy, b) precision medicine, focus on the clinical utility of liquid biopsy in lung cancer, and c) molecular epidemiology (radon gas in lung cancer).

The main research interests are the development of clinical trials in special populations of patients with thoracic malignancies, the study of novel therapeutic strategies in malignant pleural mesothelioma, the characterization of the immune contexture of brain metastases and the genomic characterization of early onset lung cancer patients. He published more than 50 papers including papers in high impact journals in the field of oncology or cancer biology.

Disclosure:
The series “ALK and ROS-1 NSCLC patients treatment approach based on genomic profile by liquid biopsy” was commissioned by the editorial office, Precision Cancer Medicine without any sponsorship or funding. Jesús Corral, Laura Mezquita, and Ernest Nadal are serving as the unpaid Guest Editors for the series. 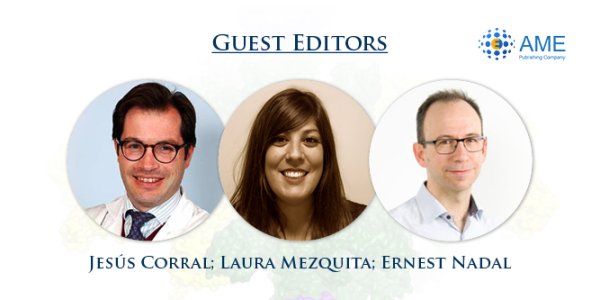