Factors associated with the extent of resection of glioblastoma

Glioblastoma (GBM) has an invasive and aggressive behavior and is the most common malignant primary brain tumor in adults. The multidisciplinary treatment, composed of surgical resection, radiation, and chemotherapy, has provided an improvement in survival time. The extent of resection (EOR) has been reported to be the leading prognostic factor for enhanced survival in patients when the EORs range 70–98% (1-5).

However, eloquent areas of the brain are distinctive structures concerning resection because potential impairments in the quality of life often limit the goal of total resection (6,7). However, several factors affect total resection in infiltrative tumors. Considering anatomical limitations, “butterfly” GBM, multiple lesions, and leptomeningeal dissemination are challenging conditions for total resection in clinical practice (8-10). Awad et al. reported a significant interaction between EOR and preoperative tumor volume. The EOR alone did not correlate with survival after adjusting for other factors. Therefore, the interaction between the EOR and preoperative volume was an essential predictor for improved survival (11). In the literature, there is a lack of evidence on the factors that correlate with EOR. The purpose of this study was to identify which factors are associated with EOR. Therefore, the confounders should be controlled before time-to-event analysis will be conducted in GBM patients.

The study was a retrospective cohort review of electronic medical records from our hospital information system. We enrolled consecutive patients who were newly diagnosed with GBM. The inclusion criteria for the study were patients who had histologically-confirmed GBM, which was consistent with the World Health Organization classification (12) by a pathologist at Songklanagarind Hospital between January 2000 and December 2018. The data collected for analysis comprised of the demographics, neuroimaging, treatment, and outcome.

Magnetic resonance images (MRI) of the brain were reviewed prospectively to demonstrate tumor location, the extent of tumor invasion, and tumor size. Adapted from Lacroix et al. (1), the degree of tumor necrosis, mass effect, and enhancement were determined. Tumor volume was quantified from preoperative MRI and postoperative MRI or contrast-enhanced computerized tomography (CT) or both of the brain.

The eloquent areas for tumor removal involved the motor cortex, sensory cortex, visual center, speech center, basal ganglion, hypothalamus, thalamus, brainstem, and dentate nucleus (1). Multiple GBMs were defined as at least two separated foci of enhancing tumors. This group included two types: multifocal and multicentric GBMs. A multifocal GBM was defined where the centers of the tumor had a short distance apart between each other that tumor cells migrate elsewhere and develop into a new tumor center, as shown in Figure 1A. Multicentric GBM was defined as the centers of tumor clearly separated from each other, for example, different lobes or bilateral brains, with no apparent route of dissemination, as shown in Figure 1B (15,16). Furthermore, the hypervascular sign was defined as visualizing vascular structures inside or around a tumor (flow void sign) in neuroimaging (8). 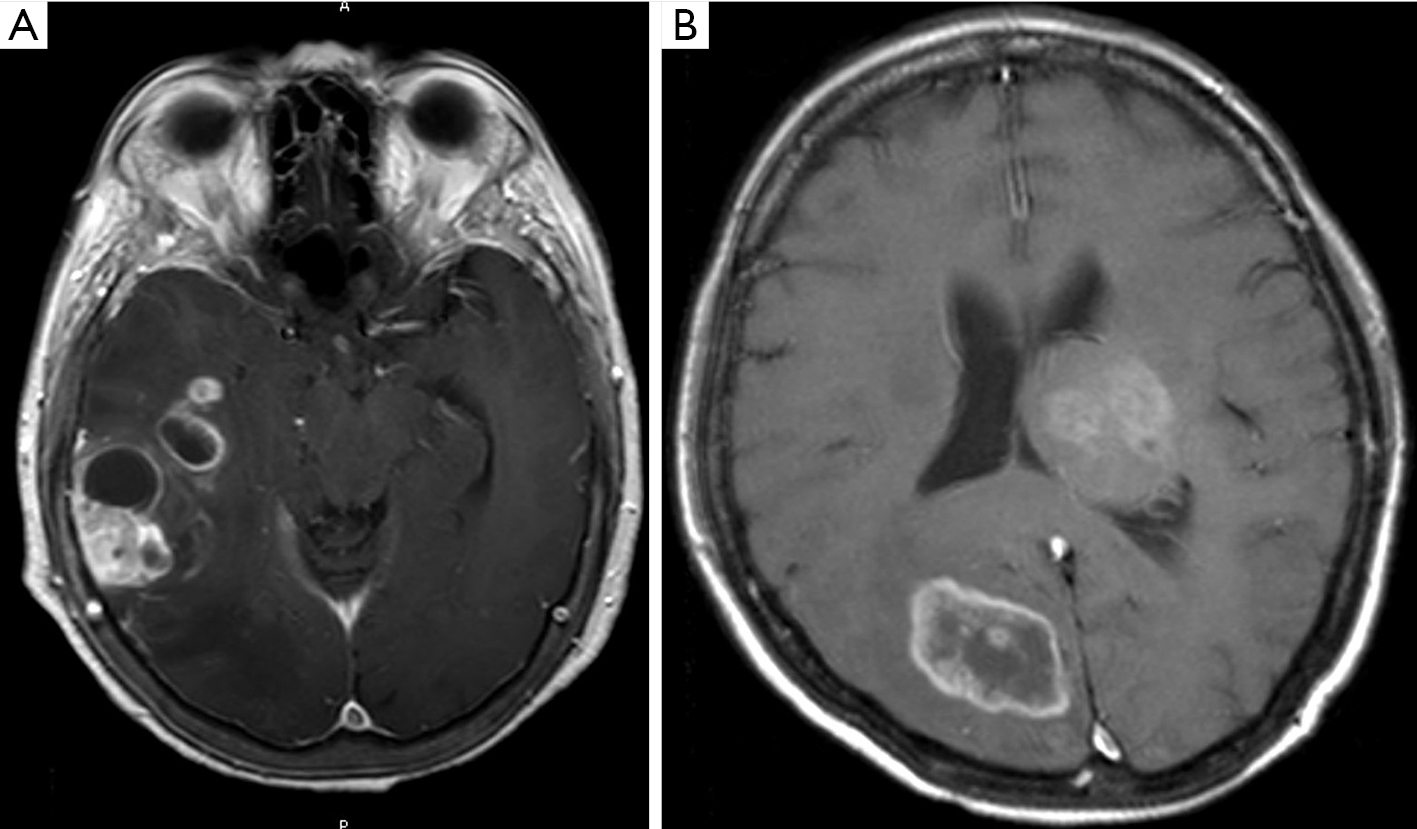 Tumor volume estimations were performed using the Smart Brush tool of BrainLAB® software (Feldkirchen, Germany) by outlining the pathologies across neuroimaging modalities, as shown in Figure 2. The study was performed with the permission of the Ethical Committee of the Faculty of Medicine, Songklanagarind Hospital, Prince of Songkla University (REC 61-293-10-1). 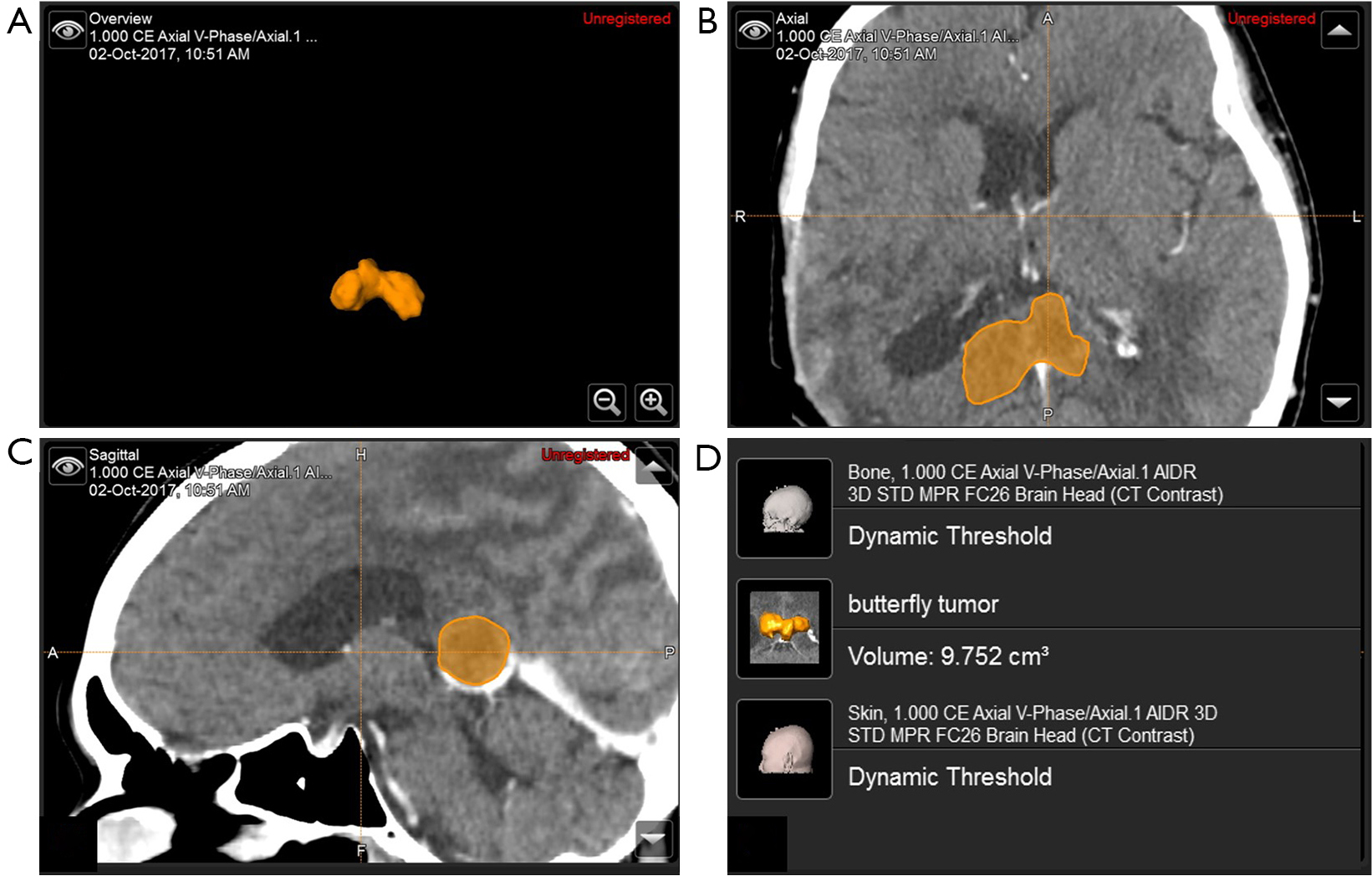 The patient characteristics, imaging factors, and therapeutic factors were analyzed using descriptive analysis presented as proportions and mean ± standard deviation (SD). The extension of resection was dichotomized into total resection and non-total resection groups. Therefore, the association between several factors and the extension of resection were analyzed by binary logistic regression. The candidate risk factors with P<0.10 from the univariate regression analysis were entered into the multivariable regression model. The Hosmer-Lemeshow goodness-of-fit test and concordance statistics were used to fit the model. Furthermore, multicollinearity between variables in the model was checked by the variance inflation factor (VIF) and tolerance methods. Moreover, the sample size was calculated using the level of significance 0.05 and power 0.8. Statistical analysis was performed with the R program version 3.4.1 (R Foundation, Vienna, Austria).

The clinical manifestations of the 173 patients with GBM are shown in Table 1. GBM was predominant in males and common in adults. The mean ± SD age was 51.2±15.3 years (range, 8–87 years). The patients usually presented with hemiparesis and progressive headache. One-quarter of the cases had a seizure at presentation. The common GBM location involved the frontotemporal lobe.

In this study, the total resection rate was 22.0%, while the rates of partial resection and biopsy were 63.0% and 15.0%, respectively. Half of the patients (64.7%) underwent radiotherapy alone after resection, while patients who received adjuvant chemotherapy were 35.3% of all patients. In detail, Temozolomide was used in one-third of the patients because the cost of temozolomide is not reimbursed by all medical insurance programs in Thailand.

Binary logistic regression was used to analyze factors predicting total resection as shown in Table 3. In univariate analysis, the significant factors were single GBM [odds ratio (OR), 4.71; 95% CI, 1.06–20.76] and tumor volume <30 mL (OR, 3.06; 95% CI, 1.44–6.48). Therefore, the candidate factors, which had a P-value <0.10 from univariate analysis, were entered into the multivariable regression model. The factors associated with complete resection were single GBM (OR, 6.81; 95% CI, 1.47–31.38) and tumor volume <30 mL (OR, 3.79; 95% CI, 1.72–8.34) in the multivariable analysis with the backward elimination method. Moreover, we repeated the multivariable analysis with a forward selection procedure and obtained identical results. 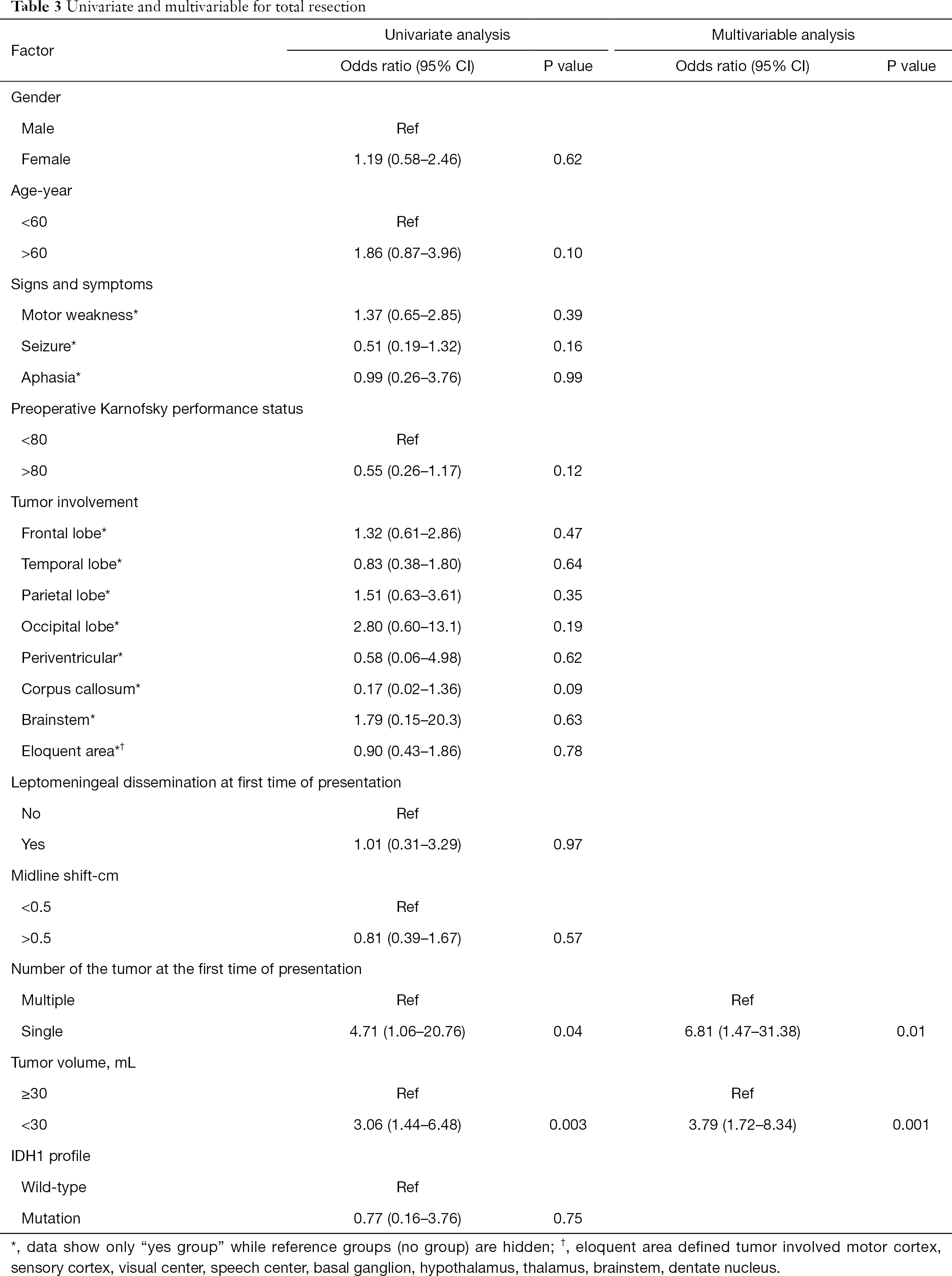 GBM is the most common primary malignant tumor in adults and has aggressive behavior.

The EOR has been shown to be an important prognostic factor for survival (1-5). Because GBM is an infiltrative tumor, the rates of total tumor resection were reported in the range of 17.6–40% (5,17). In clinical experience, the EOR depends on several factors, but no evidence has been reported in the literature.

A GBM rising bilaterally at the corpus callosum usually builds a "butterfly" pattern on the axial view. The biopsy is the common EOR of the butterfly GBM in 64.1–69% of the patients (18,19). In the present study, total resection was performed in 0.6% (1/173) of all patients because surgical resection of a corpus callosum tumor is a challenge to balance between maximum resection for prolonged survival time and a permanent neurological deficit (19). Consequently, tumor infiltration at corpus callosum was not significantly with total resection.

The incidence of multifocal tumors ranged from 11.7% to 12.8%, and patients with multifocal tumors experienced a significantly shorter survival compared with the solitary GBM group (20-22). The success rate of total resection in multiple GBM was 1.2% (2/173) of all patients in the present study, and Patil et al. reported that 87.2% of multiple GBM underwent either a biopsy or partial resection. Therefore, residual tumors from non-total resection rapidly progress and were correlated with a poor prognosis (22).

Additionally, tumor volume <30 mL in GBM was the prognostic factor that was significantly associated with total resection. The surgical approach in smaller tumors is more comfortable to manipulate than the larger tumors (11,23). In this study, a large GBM was significantly associated with the degree of brain edema and midline shift that directly interfered with the degree of tumor resection.

According to our knowledge, the present study is the first paper to mention the factors associated with the EOR, which were reported only as potential prognostic factors in GBM. Therefore, a survival analysis of the patients with GBM should be stratified by these factors because EOR may be the confounder. Awad et al. reported that EOR alone did not correlate with survival after adjusting for other factors because EOR and preoperative tumor volume significantly interact with each other (11). The stratification, according to the number of tumors or tumor volume and multivariable analysis, is methods to control the confounding effect, which should be the approach in a future survival study of GBM (24,25).

Alternatively, propensity scores are an increasingly popular method to adjust for confounding in observational studies that cannot conduct the randomized control trial. Before evaluating the association of the EOR and survival of GBM patients, the pretreatment variables associated with the EOR should be adjusted by propensity scores (26,27).

Not all GBMs are amenable to complete surgical resection. Multiple lesions and tumor volume ≥30 mL are the potentially limiting factors. Therefore, the EOR should be controlled from confounding factors by stratification, multivariable analysis, or propensity scores before performing a survival analysis.

The authors would like to thank Mr. Glenn Shingledecker of the International Affairs Office, Faculty of Medicine, Prince of Songkla University for manuscript proofreading and language editing service.

Conflicts of Interest: Both authors have completed the ICMJE uniform disclosure form (available at http://dx.doi.org/10.21037/pcm.2020.01.01). The authors have no conflicts of interest to declare.

Ethical Statement: The authors are accountable for all aspects of the work in ensuring that questions related to the accuracy or integrity of any part of the work are appropriately investigated and resolved. The study was performed with the permission of the Ethical Committee of the Faculty of Medicine, Songklanagarind Hospital, Prince of Songkla University (REC 61-293-10-1).